Story of a paralysed man & his path to empowerment is winning hearts on social media! 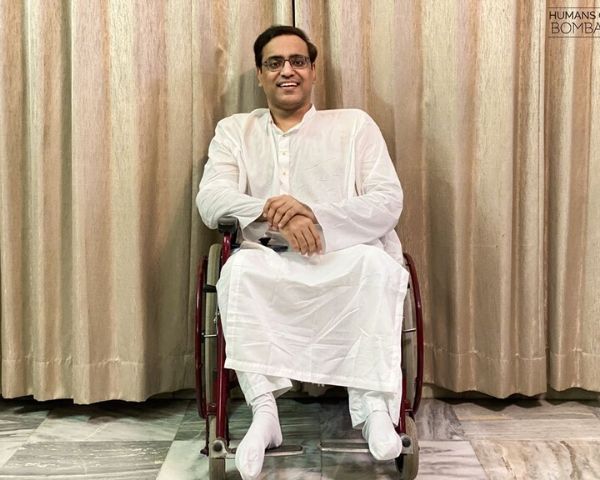 Recently, Facebook page ‘Humans of Bombay’ shared the story of a man who was paralyzed at the age of nine. But he has found his path to empowerment. He trades stocks for a living. But his passion is to teach kids, and has been doing it for the past many years. He wants people to know that in the current scenario, staying inside the house can be depressing. But once you are out, so much can be achieved.

‘Humans of Bombay’, a Facebook page that brings to its readers heart-touching life stories of people recently shared the story of a paralyzed man who is on a wheelchair. Akash* (name has been changed) shares about how the last 40 years of his life has been quarantine for him. After being diagnosed with a health problem and then paralyzed, this young man had to confine to the four walls of his home. But he has beaten all odds to read and learn. Over the past many years, he has taught at least thousand students and made their lives brighter by imparting his knowledge. Akash does not charge a penny from them! Read on to know more about his interesting life story.

Disability diagnosis at a young age

Young Akash woke up with high fever one night when he was just nine years old. His mom gave him a few pills and put him back to sleep. But the next morning when he woke up from bed, he fell down. His mother thought that he had become weak and picked him up. But he told his mother that he felt like he had no legs!

His panicked mom tried to pinch and move him, but all in vain. He was rushed to the hospital where he was declared paralyzed.

“I didn’t understand what it meant, but mom broke down– it had come out of nowhere. So mom and dad hoped it’d go as suddenly as it came. Over the next 5 years, we ran from pillar to post, looking for a cure. We visited doctors and tantriks alike but nothing worked. At home, I depended on others for the smallest of tasks. I couldn’t go to school or meet my friends, which got to me, but my family struggled too. As I got bigger, it got difficult to carry me and I knew my treatment was affecting our finances”, he says.

The path to self-empowerment

Akash says that at the age of 14 is when he realized that he has to continue living a life in this way. So he decided to do the only thing that he could do properly and reading it was! He started reading a lot of books and newspapers. Even though he couldn’t move a limb or sit straight for more than 30 minutes, Akash started reading textbooks out to his friends. He clearly couldn’t attend school also.

“As they passed from one grade to another, I knew that one day, they would complete their education and get a job, while I’d still be at home, reading with no purpose. For a long time, I felt lost and helpless. But when we moved houses, I found my life’s purpose”, says Akash.

By the age of 23, Akash came to be known as an intellectual. When one of his neighbor’s tuition teacher did not turn up, they asked him if he could teach. The subject was math and Akash felt easy and comfortable teaching it. He even added some humor to make it fun for the kids. It did work out and Akash realized what his true passion was. The kids asked their tuition teacher to stop coming and Akash became their new teacher. That was indeed a new beginning for him.

His student batches started to grow in number from 50 to 100 and more. Akash has been teaching kids for many years now and has not charged a penny from any student! He earns a living by trading stocks. “It got to a point where I was teaching 1000 kids and while it may have driven someone else crazy, my students kept me sane! I believe that most learning happens through teaching– and I don’t ever want to stop”, he says.

Right now, Akash has been having health issues due to which his lungs, bones and heart are affected. So he has been creating short awareness videos of YouTube on topics like ‘Helicopter Money’, ‘Jio’, and even ‘Covid-19’.

He signs off by saying, “I’ve been hearing a lot about how difficult it’s been for everyone to be caged at home. But, take it from someone who’s always been ‘quarantined’– if I could come so far from within the 4 walls of my home, imagine how far you’ll go once you’re out. Stay strong”.