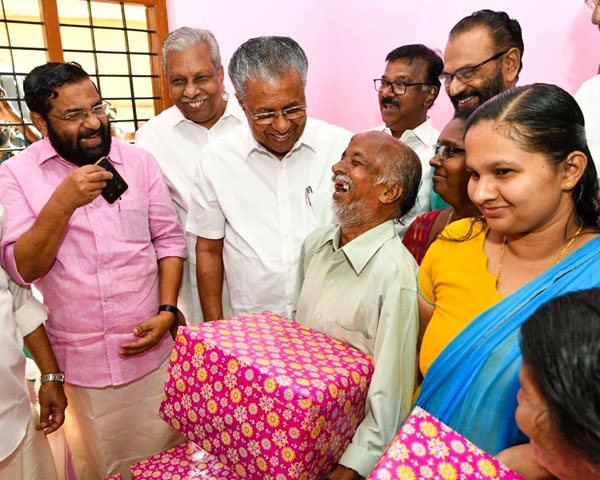 Kerala chief minister Pinarayi Vijayan arrived for the house-warming ceremony of Chandran Kavumpuram who has a disability. The state government had built him a new house under their LIFE Mission Housing Scheme. Vijayan arrived with many gifts for Chandran and his family on their special day. The minister took to his social media to share the news after which he received a lot of praise.

Last Friday was very special for Chandran Kavumpuram and his family. Chandran, who is disabled, always dreamt of building his own house. But his dreams got shattered a few years back after he was diagnosed with disability. But the Kerala government did not let him down. They built him a house under the LIFE Mission Housing Scheme. It was none other than Kerala Chief Minister Pinarayi Vijayan who attended the house-warming of Chandran’s new home. Vijayan shared this gesture on his social media account and won a lot of hearts for his gesture.

The government of Kerala has always introduced numerous schemes and policies for disabled people in the state. Under the LIFE mission scheme, over 2 lakh needy people have been provided with houses.

The scheme aims to provide decent and healthy living conditions to people who are economically backward. For many people like Chandran, this LIFE scheme is truly a life giver.

A memorable day for Chandran and family

Chandran, who used to sell lottery tikets, met with the worst after he had a sickness due to which he became disabled. He lives with his wife and daughter at Enikkara Panchayat in Thiruvananthapuram. Chandran had kept aside his dreams of building his own home. But fate had other plans for him in the form of LIFE mission scheme

On their house-warming day, Chandran, his wife and daughter awaited excitedly for the minister outside their new home. Vijayan was accompanied by ministers AC Moideen, Kadakampally Surendran and MLA C Divakaran. The local people were as excited as Chandran. The ministers were welcomed with band music and songs. Vijayan handed over the key to the excited family. He also had brought many gifts for the ceremony including utensils and other things needed for a new home. The happiness of this family knew no boundaries.

2,00,000 houses and a million smiles, that’s LIFE mission, Kerala’s comprehensive housing scheme. Kerala’s quest to become a State with no homeless people has crossed a major milestone. Since we took office, more than 2 lakh houses have been completed- Pinarayi Vijayan, Chief Minister of Kerala.

Karakulam Panchayat President Anila told The New Indian Express, “Chandran’s old house was in poor condition and water used to enter the place. He would ask me if he will ever be able to have a secure house. Now he has one”.