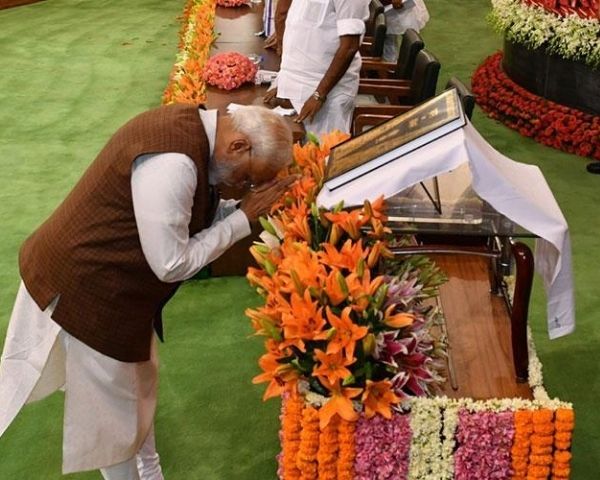 Prime Minister Narendra Modi laid the first brick for the Ram Temple at Ayodhya at a mega ceremony on Wednesday. He called it an emotional moment for India and said that a long wait had ended.

Chanting Siyavar Ram Chandra ki Jai! and Jai Siya Ram, he addressed a gathering of spiritual leaders after laying a 40-kg silver brick to mark the start of temple construction.

The PM returned to Ayodhya after 29 years to take part in the ceremony for the temple. Building the temple has been a core promise of the ruling BJP.

Every heart is lit. It is an emotional moment for the entire country. A long wait ends today… Crores won’t believe that they have seen this day in our lifetime. For years, our Ram Lalla (infant Lord Ram) lived beneath a tent, now he will reside in a grand temple built by Ram bhakts. Today, Ram Janambhoomi has been liberated. Today, this chant is not only reverberating in Ayodhya but across the world. – Prime Minister Narendra Modi

The BJP has for years campaigned for a Ram temple at the site where the 16th century Babri mosque once stood before it was destroyed by activists who believed it was built on the ruins of a temple marking the birthplace of Lord Ram. The 2.77 acre site was claimed by both Hindus and Muslim until the Supreme Court last year handed it over for a Ram temple.

“Witness the remarkable power of Ram. Buildings were destroyed, attempts were made to destroy his very existence. But Ram is still entrenched in our minds and is the heart of our culture”, said PM Modi.

The Prime Minister first offered prayers at the Hanumangarhi temple – a shrine to Lord Hanuman. He went to Ramjanmabhoomi or the birthplace of Lord Ram to pray at the shrine to “Ram Lalla”, the infant Lord Ram, before proceeding to the site of the main “Bhoomi Pujan” ceremony.