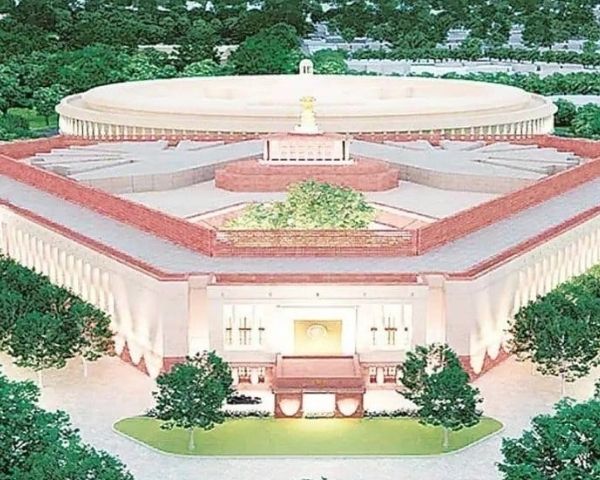 Prime Minister Narendra Modi on Thursday laid the foundation stone for a new parliament building that is to come up in the heart of Delhi. As the premises were filled with Sanskrit chants by priests from the Sringeri Mutt in Karnataka, Modi completed the rituals in a traditional Hindu ceremony. Apart from Ratan Tata, whose Tata projects are taking up contract works for the building, other union ministers, religious leaders, BJP MP’s and foreign envoys were present at the event.

“Hon PM Shri @narendramodi Ji laid the foundation stone for new Parliament building in New Delhi. The building will give necessary upgrades and facilities to the institution, enhance the productivity of Parliament & will prove revolutionary in streamlining the administration”, tweeted BJP’s national President JP Nadda.

Construction works for the new parliament cannot start soon unless Supreme Court gives a go-ahead to the project since there are petitions challenging the works.

While addressing the crowd present at the venue, Modi said that the new parliament will be a symbol of a self-reliant or ‘Aatma Nirbhar’ India.

The Rs 20,000 crore project will be built in four floors over 13 acres very close to the Rashtrapati Bhavan. BJP-led central government plans to complete its works before 75th Independence Day which is in 2022.

India is battling deadly Covid-19 pandemic and farmer protests are intensifying in the national capital. On social media, there were widespread criticism by opposition leaders about central government not paying attention to important causes.

“Dear PM, Parliament is not mortar & stones, It envisions Democracy, It imbibes Constitution, It is Economic-Political-Social Equality, It is Compassion & Camaraderie, It is aspirations of 130 Cr Indians. What would a building built upon trampling of these values represent?”, tweeted Randeep Singh Surjewala, General Secretary of Congress party.

“Laying foundation stone of #NewParliamentBuilding at a time when farmers are protesting to save their basic thali is equivalent to “playing DJ music inside a funeral ground” #CentralVista”, tweeted Congress spokesperson Jaiveer Shergill.

“Well, the existing Parliament building built by the Brits bears a remarkable similarity to the Chausath Yogini Temple in Morena in Madhya Pradesh, while the new ‘atmanirbhar’ Parliament building bears an eerie likeness to the Pentagon in Washington DC”, tweeted former union minister and Congress leader Jairam Ramesh.