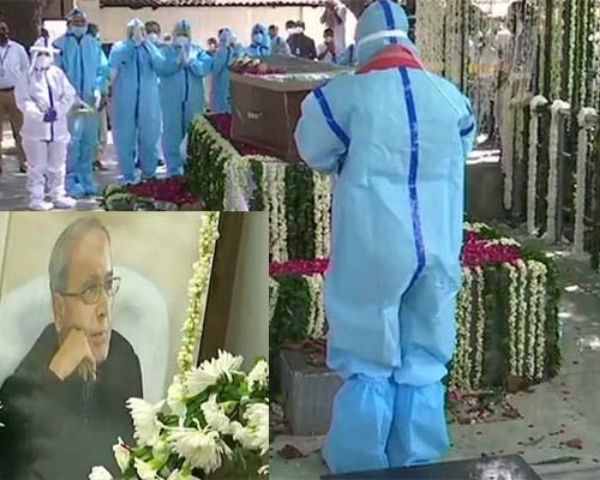 Former Indian President Pranab Mukherjee, who passed away on Monday evening, was laid to rest at Lodhi crematorium in Delhi with full state honors. Mukherjee’s son Abhijit Mukherjee performed the last rites of one of India’s most respected presidents. Since Mukherjee was tested positive Covid-19, all the protocols were followed for the cremation as well.

The 84-year-old former President’s mortal remains was kept at his residence from 9 am to 12 pm. Prominent leaders including Prime Minister Narendra Modi, President Ram Nath Kovind, Union Minister Rajanth Singh and Congress President Rahul Gandhi were amongst those who paid their last respects to Mukherjee. China also paid their rich tributes to the late leader stating that Mukherjee has made positive contributions to India-China relations.

Mukherjee was covered in the tricolor flag and brought to Lodhi in a flower-decked vehicle where he received final tributes from the nation.

Mukherjee was undergoing treatment at RR Hospital in Delhi and was admitted there on 10 August. But over the past one week, his health condition had deteriorated. He had lung infection due to which he went into a septic shock.

Central government has announced a seven day mourning from 31 August to 6 September. The national flag will only fly half-mast in all public buildings.

Originally from West Bengal, Mukherjee was a staunch Congress follower who had fans from across political parties.