#SupportAutismAwareness – Sitar player & chef, Pratibha Rajeev has all the support from her doting parents 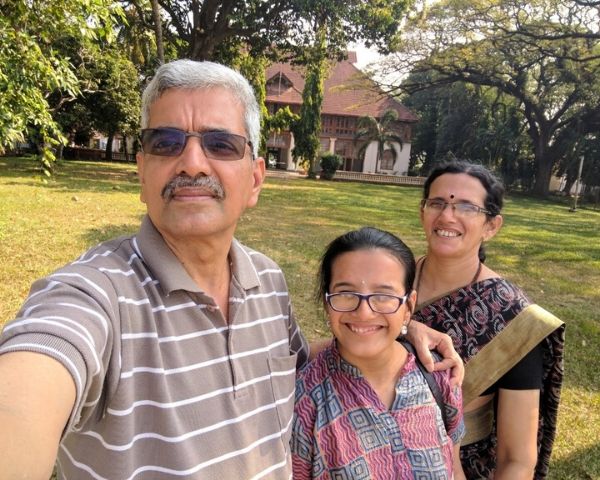 Our monthly feature #SupportAutismAwareness brings to you stories about families of youngsters with autism who have stood by their kids through all odds and obstacles to empower them. Today, we feature the family of 32 year old Pratibha Rajeev from Mumbai. Pratibha’s father Rajeev Srinivasa and mother Asha Rajeev are her biggest pillars of support. Today, Pratibha is a Sitar player and also works at Café Arpan.

The road to success is not an easy one. When Pratibha Rajeev was diagnosed with autism at the age of two, her father Rajeev Srinivasa and mother Asha Rajeev knew that the path ahead was filled with hurdles and obstacles. So they decided to work on empowering their only girl child. The family that currently lives in Mumbai is all smiles when they talk about Pratibha’s amazing journey. This youngster has also made her mark by working at Cafe Arpan and earning on her own. She is also a professional Sitar player.

Diagnosis of autism at the age of two

Rajeev and family were in Chennai when Pratibha was born. The couple were excited to have their second child and first girl daughter. But in course of time, they realized that her milestones were delayed. She was soon diagnosed with autism and the family started early intervention soon.

We thought Pratibha had mental retardation. That was the most common term used during that time. People had no awareness about autism. We even did genetic tests- Rajeev Srinivasa, Pratibha’s father.

Pratibha started talking and even walking only by the age of four. Moreover, she did not make any eye contact with people either. The family decided to do all that they can to make her a strong and independent young woman.

Though initially she was a quiet kid, Pratibha slowly started picking up with her peers. She was introduced to classical dance, mainly Bharatanatyam. Her first ever performance in the year 2008 was lauded by audience.

“Attitudes towards children with autism was way better in Mumbai. We had faced many discrimination while in Chennai. People refused to talk to us and other children of her age did not play with her. But in Mumbai, Pratibha got an ideal platform to grow. People, including children, were more welcoming and open”, says Rajeev. Over years, Pratibha got introduced to music too. “Dance helped her a lot as a therapy”, he adds.

Slowly, from being an introvert, Pratibha became a youngster who soared high with her wings. She became more social and an extrovert. People could start having conversations with her and go on forever!

In 2014, a surgery was done for Pratibha after which she started undergoing occupational therapies and so on.

Rajeev was learning to play the Sitar when Pratibha also started showing interest in it. His same teacher used to train Pratibha as well. Last year, Pratibha did her first Sitar performance for over one and half hours. Now, she is a trained Sitar player who can play at any venue. Simultaneously, she is learning it as well.

Since the past five years, Pratibha has been working with Café Arpan in Mumbai which is run by youngsters with disabilities. She always loved cooking. So working in the café was something interesting to her.

Ever since the lockdown began, Pratibha started a YouTube channel with her cooking recipes. ‘Yum and Special’ shows recipes for over 21 dishes made by Pratibha.

Lockdown days are not boring to Pratibha because Café Arpan has a four hours zoom call session where its members are made to do many activities. This keeps them engaged and they can also learn new tasks.

“When I realised that Pratibha has autism, I was devastated and shocked. I was depressed for a couple of years. But I decided to gather all the broken pieces and start anew to help my daughter. That is when Pratibha also started becoming empowered. Find what suits your child best. Their interests matters a lot. Our family is always supportive of whatever she wants to do”, says Asha Rajeev.