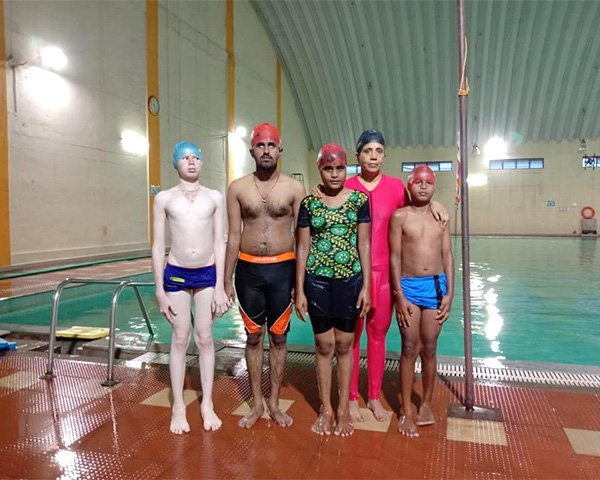 59 year old Rajini Lakka is a favourite amongst children with disabilities at Bellary. The reason, she teaches them swimming in the most fun and exciting ways. Rajini’s services are free of cost too. With the help of Bellari administration, Rajini started the Sai Rajini Swim Life Academy which was established in the year 2014. She has taught over 50 children with different kinds of disabilities in a span of five years. Rajini is happy and fulfilled that she has been able to empower many children with disabilities.

Tryst with coaching children with disabilities

Rajini holds the title of being the only woman from India who teaches swimming to children with disabilities, something she is proud of. Her career started off as a beautician in the year 1985. But since childhood, she was interested in sports. So at the age of 46, she decided to try her luck with swimming.

A few years back, a group of people in her town approached her to do something for children with disabilities as a service. So Rajini thought to put her skill to use.

Over the last few years, I have been preparing children to participate in state and international level championships. Many have won it too. I also taught a 44 year old person with a disability. Some children show enthusiasm to join and later never turn up. It is because my services are given for free. I feel they might not even take it seriously because of that. But I love what I’am doing though this is not an easy job- Rajini Lakka, Swimming Instructor.

Rajini has won 75 medals in swimming for national and international levels. She has made her state Karnataka proud at many events. Rajini is now busy preparing her children to attend the upcoming para swimming competition at Bengaluru on 11 January. 13 children with disabilities are participating in the event under her guidance.

“Some days I have health issues owing to which my body hurts. Sometimes children have mood swings and they get angry. They do not respond”, she says. Children with mental disabilities, autism, Down syndrome and cerebral palsy come to attend Rajini’s classes.

She says that swimming is ideal for both children with and without disabilities. “Swimming is a great physical exercise. It has no side effects and helps to alleviate all your physical issues. So only when a child with disability shows interest will I cooperate”, says Rajini.

Ramesh’s 17 year old son Sai Nikhil has a mental disability. He has been trained under the guidance of Rajini for the past few years. Nikhil has attended swimming competitions at Gujarat, Rajasthan and even Sri Lanka. He has won gold and silver medals too. “Nikhil attends Rajini’s classes for one hour every day. He loves swimming. Rajini’s training makes it better. She is always ready to lend a helping hand”, says Ramesh.