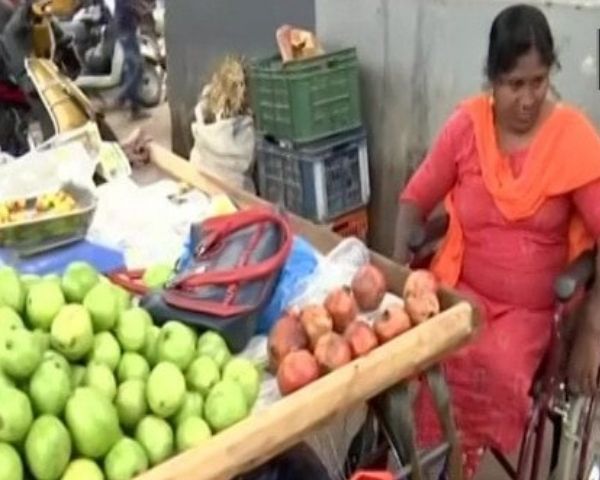 The story of wheelchair user Rama Devi from Hyderabad who begged for over two years before starting her own fruit stall is now going viral for the right reasons. Rama’s story proves that if there is a will, there is a way.

When you have a disability, finding jobs to sustain is not easy. So what if you are a single parent from an economically backward family who has to support three children? Rama Devi from Hyderabad was affected by polio due to which she has been using a wheelchair. After death of her husband, Rama has been begging on the streets for a living, but is now selling fruits to feed her family. Rama’s story has gone viral on social media for all the right reasons. Read on to know why.

Soon after Rama’s birth, her parents abandoned her due to which she doesn’t have any whereabouts of her biological family. So she was adopted by someone who raised her well. Rama completed her class 10 from Zilla Parishad High School and Intermediate from Government Junior College in Nalgonda in Telangana. She then got married and settled down with her husband in Hyderabad.

But fate was cruel to her. After seven years of marital bliss, her husband passed away two years back. Left with no option to support herself and three kids, Rama started begging on the streets of Hyderabad. She has two biological sons and had also adopted a daughter.

Reportedly, Rama was gifted a wheelchair by an unknown person after they spotted her on the road dragging her body to move around. She even tried to end her life by suicide when new doors of opportunities opened up for her. She is now a fruit vendor who lives independently and takes care of her children.

A local vendor Sheikh Afsar told the ANI, “For the last two years Rama Devi was begging and we were pained seeing her condition. Now we are happy that she is engaged in her own business by setting up a fruit stall”.

Apart from social media, Rama has been flooded with love from different parts of the country. Zeenath Sadar, a wheelchair user from Kerala says, “In times when disabled people, especially poor, finds it hard to earn a living, Rama has shown the right way. Her story proves that if there is a will, there is a way. I hope she makes the best out of the new life offered to her by God”.