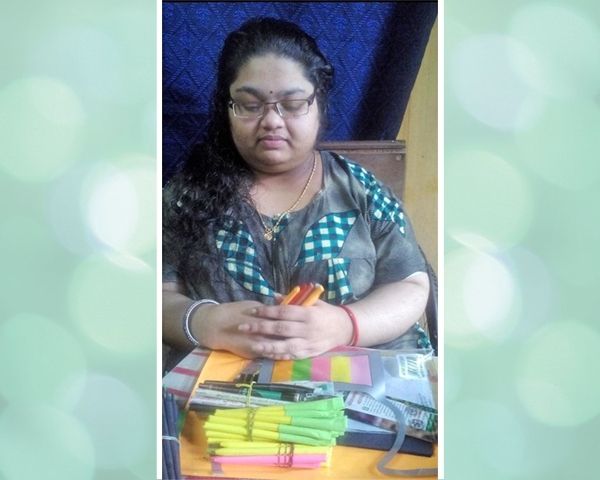 Spinal Muscular Atrophy (SMA) community members officially recognizes August as SMA Awareness month. Our month-long campaign #RaiseAwarenessAboutSMA will feature stories of fighters with SMA who have beaten all odds to live an independent life. Today we have 30-year-old Ranjini from Trivandrum who makes paper products for a living.

Ranjini was diagnosed with Spinal Muscular Atrophy (SMA) at the age of 21. This youngster who is now 30 years old, is finding ways to support herself. Life has not been easy for Ranjini who has a lot of financial constraints at home as well. Being a wheelchair user, her mobility is also limited. But Ranjini is determined to find ways to become independent in life. She is now making paper pens at home and selling it through online platforms. Ranjini loves what she is doing, but with the meagre amount that she gets, it is unable to fend for herself and her family.

Ranjini remembers that her early years were a struggle in many ways. From the age of ten, she kept having occassional falls. Unlike other children, Ranjini couldn’t move around, walk or play. All these hurt her as a child. At the age of eight, she had a small accident which led to a fracture in her knee. This raised eyebrows of her parents who decided to consult her to a doctor.

“The doctor told that I won’t be able to walk normally and that is exactly what happened. Over the years, I tried different treatment methods. There was no improvement to my condition. I couldn’t walk. It went on like that for many years. There were days when I was depressed and never got out of bed”, she says.

A few people suggested a good doctor to Ranjini and within a few days she was diagnosed with SMA. It was just a matter of accepting her disability. “The doctor told me that there are no specific treatments or medicines for SMA. He even asked me not to waste any more money on this”, says Ranjini who had to discontinue her studies after class 3. Her physical condition and financial constraints did not allow her to pursue school.

Ranjini’s parents and sisters are supportive of all her ventures. So when Ranjini told that she wants to start a paper-pen business, they all stood by her.

Unnikrishnan, one of Ranjini’s close family friends, guide and mentor started a WhatsApp group for people with disabilities to support each other and start their own ventures. Ranjini who was part of the group decided to opt for paper-pen making.

Ranjini loves art. She draws, makes craft products, paper-pen stands, dream catchers and also experiments with new things during her free time. “I had a good business for paper-pens, but it has come down drastically after lockdown. My business has been affected really badly”, she says.

Ranjini plans to continue her work amidst all odds. She proudly says that her bunch of great friends and kind-hearted people around her makes life beautiful. Being part of the NGO MIND has also helped her increase her self-esteem and confidence. The MIND team, with the help of contributions from people, are building a house for Ranjini because she currently lives in a very small space.

Ranjini’s mother Santha says, “I cried a lot when I came to know that my daughter will not walk properly for the rest of her life. But now I’am looking at the brighter side of things. Ranjini is doing things independently and even supports us”.