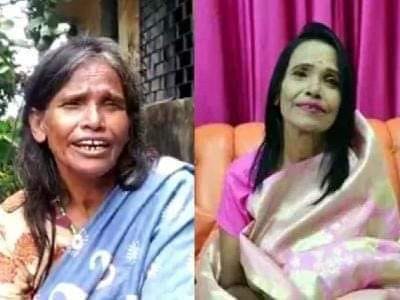 Social media users need no introduction to Ranu Mondal. The 59 year old rose to internet fame after a video of her singing a Hindi song went viral on social media. Many people pointed out that her sound was more like ace singer Lata Mangeshkar. In a recent video that is doing the rounds on social media, Mondal can be seen turning away the request of one of her fans to take a selfie with her. In what looks like a grocery store, the lady fan touches Mondal to which she gets irritated and reacts quickly. Her latest act has created quite an outrage with people posting about how Mondal is already throwing celebrity tantrums.

Ranu Mondal, who was singing in Railway Station says: * She’s now a celebrity and others shouldn’t touch her! This is what happens when people don’t know to handle the instant name and fame they get!-Mahesh Vikram Hegde, Twitter User.

Ranu Mondal used to sing at railway stations in West Bengal when a passer-by noticed her and took a video of her singing the song yeh pyar ka nagma. The video went viral on social media after which she garnered a lot of attention. Later, Mondal even went on to sing the song for renowned music director Himesh Reshammiya as well. Her rags to riches story was widely shared by people from across the globe. Mondal has also appeared in many TV shows across India.

Reportedly, a handful of music directors have already booked Mondal’s dates for singing their songs in movies. The question now remains whether Mondal will still have a fan following after her latest gesture. “One video made her a sensation , other takes her down again ! That’s the power of social media ! #RanuMondal”, tweeted Nidhi Verma.