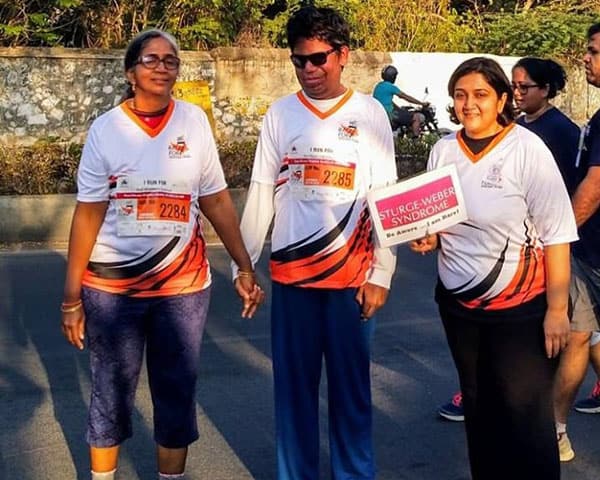 In our July campaign #RareDiseases, this week we look at Sturge-Weber syndrome. Present at birth, it is regarded as a spectrum of diseases which may affect either the eyes, skin and brain, or all three systems.

“No doctor in Delhi had seen a baby with this condition”, says Geetha Narayanswamy recalling the birth of her son in 1998. Vinayak, her second child, was born with a rare disorder called Sturge Weber syndrome (SWs).

It was only after a neonatologist who had worked in hospitals in the West saw Vinayak that Geetha and her husband B Narayanaswamy found a name for the condition.

It was a big shocker for everyone. The only connection we could find to an expert with some idea of this rare condition was a paediatric neurologist at the All India Institute of Medical Sciences in New Delhi but there was a hospital strike for the first 10 days after his birth. You can imagine what we went through. Eventually we found out about a foundation in Chennai with a neurologist who was an expert in Sturge Weber syndrome. – B Narayanswamy, Parent to child with Sturge Weber syndrome

That still did not save the family from years of confusion as they discovered in stages how SWS affects a person.

What is Sturge-Weber syndrome (SWS)

Characterised by what is called a port-wine birthmark, neurological as well as eye abnormalities like glaucoma, SWS is seen as a spectrum of disease. Those affected may have abnormalities affecting all three – brain, skin and eyes, or only two, or only one.

This means the specific symptoms and severity can vary quite dramatically from person to person. While the symptoms are usually present at birth, this is not inherited. Some symptoms develop later in adulthood.

SWS is broken by some experts into three main subtypes.

Given its highly variable nature, access to informed and experienced care is vital, something many families in India struggle for. For the Narayanswamys, this involved moving to Chennai and later Pondicherry for Vinayak’s care.

“In Vinayak’s case, there are calcifications in some parts of the brain and hence he is seizure prone”, says Geetha. This means functions related to that part of the brain are weak, she explains. “His fine motor skills are weak, as are speech/language skills”. Despite this, the 20-year-old has mastered three languages – Hindi, English and Tamil. “His music faculties are very strong, as are visual and spatial skills”, says Geetha.

This goes side by side with not knowing what lies ahead and how the condition may manifest itself. “We have zero idea what lies ahead”, says Narayanswamy. “The seizures are now under control and though there are periodic instances, we manage. At some point, we found out he had glaucoma and we are currently battling with a skin allergy”.

All of which points to a critical lack of experts when it comes to dealing with rare diseases on the whole, which are multi-disciplinary in nature. It was this gap that Geetha and Lakshmi Menon, one of the oldest SWS patients in India, are trying to fill by starting an association for SWS patients.

Mumbai-based Lakshmi, who is 65 years old, was never diagnosed with SWS at birth. As someone who has suffered for lack of information, she is committed to helping other families. In Lakshmi’s case, her glaucoma was detected at the age of 14 by which time her optic nerve was totally damaged.

“Doctors at the time had no idea and I found out by myself little by little”, she says. “I tried to cope by reading up about it and I joined a support group in the United States”. Lakshmi shared her experiences with the group and took part in online research too. “Since I don’t have a neurological condition, I consider myself fortunate and felt that I should be a part of the research”.

Prevalence data of SWS in India is not available says Dr Mukesh Kumar, a neurologist at Max Hospital in New Delhi. “The incidence in India is one in one lakh people. Typically most children with SWS get diagnosed when they get to a neurologist which is later as kids typically go to paediatricians”. There is no question of surgery for children who are prone to epileptic seizures, says Dr Kumar as SWS affects multiple parts of the brain.

Lakshmi believes an attitude change is most essential. “Very few people want to talk about it as they regard it as a stain on the family”.

“I recently participated in a run for rare diseases and was stunned to see that there are hundreds of rare diseases”, adds Geetha. “Our efforts to create a support group for SWS have not been been successful because few people continue after making the initial contact. We want to create a database to see at what stage people develop complications and document them so we can build support”.

If you would like to join this group, you can reach them on Facebook at Sturge Webers in India. You can also reach Geetha Narayanswamy at emailgeetha@gmail.com