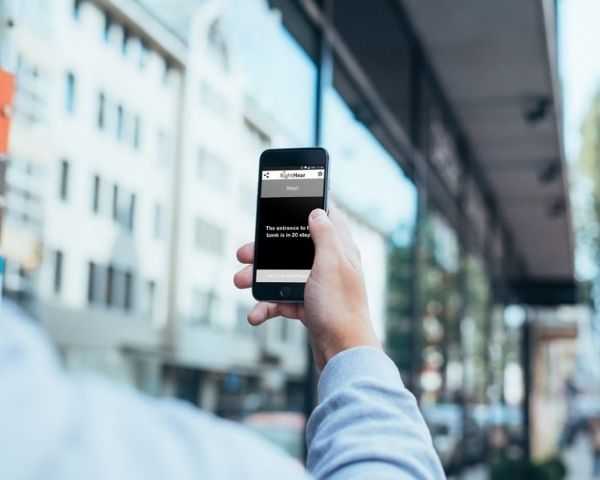 Technology August 16, 2021
The use of navigation apps is increasing both in everyday life as well as during specialized activities like cycling and hiking. Many such navigation apps are also available for the blind, with RightHear being one of the most promising. RightHear, developed by an Israeli start-up, seeks to expand its global footprint.

Moving around in an unfamiliar environment is difficult for anyone. It is even more complicated for a person with impaired vision.

The challenges were brought home after deaf blind swimmer Becca Meyers decided to pull out from the Tokyo Paralympics 2020 after the United States Olympic and Paralympic Committee (USOPC) refused the para swimmer’s request that her personal care assistant, who is her mother, be present at the Games. The decision, she said on Instagram, left her with “no choice” but to withdraw. “I’m angry, I’m disappointed, but most of all I’m sad to not be representing my country,” said Meyers in her post.

Such situations emphasize the critical gaps that remain in terms of inclusion and accessibility for people with disabilities. This is the gap that Israeli start-up RightHear is determined to fill with the launch of an app for the blind. It offers navigation to people who are blind or visually impaired and seeks to bring inclusiveness to everyday life.

RightHear is not the first navigation app for blind people. Some other widely used navigation apps for the blind are AccessNow, AroundMe, Autour, and BlindSquare to name a few. But there are not many apps that make navigation in indoor spaces easier for people with visual impairments.

RightHear is changing that, one venue at a time. The company has built a system for visually impaired users aimed at making indoor places such as malls, hospitals, grocery stores, restaurants, museums, and universities accessible.

RightHear consists of three components: a phone app, Bluetooth-enabled sensors installed at the location, and the management platform. The platform allows subscribers to edit each location’s information. When an office moves floors, for instance, this can be helpful. A building or location is mapped and installed with RightHear sensors. Using the data collected by the app, the user is guided by a narrator who provides information about the surrounding area, warns of obstacles ahead such as stairs or automatic doors as they move forward.

In a supermarket, for example, the app can navigate to the bakery section or the vegetable aisle. In a mall, it can take you to a particular store or area. – Idan Meir, Co-founder & CEO, RightHear

RightHear is available in 26 languages and is free for Android and iOS users alike. Venues are responsible for paying for the system and platform. It can also call for assistance if necessary. Currently, RightHear operates in over a thousand locations around the world, including Europe, Canada, and the United States, where the company has 30 ongoing projects. RightHear recently began a pilot with the global coffee chain Costa Coffee in Dubai and has plans to set up shop in Australia.

Moreover, every McDonald’s restaurant in Israel is equipped with a voice navigation app for the blind, making it the world’s first chain of restaurants that is fully accessible to the blind.

“Our vision of making the world more accessible to all individuals is closer than ever before, with nearly 3,000 accessible spots in over 600 venues (and counting) across the globe”, says RightHear co-founder and CTO, Gil Elgrably.

People with disabilities such as dyslexia or agoraphobia – a disorder that causes fear of unfamiliar places in which one may feel trapped or unsafe – can also benefit from the app. It is also useful when there are language barriers.