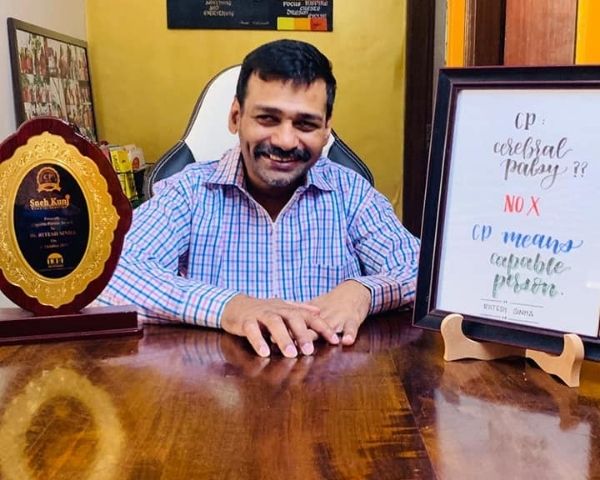 Dr Riitesh Sinha, an inventor based in Karnal, Haryana, has developed an app to create awareness about cerebral palsy. Called Alternative Therapies for Cerebral Palsy, the app is available for free on Play Store.

A Karnal-based inventor, Dr Sinha faced many struggles while growing up. He now works to create larger awareness about CP through his books and the social media.

His latest attempt in this direction is an Android app that was launched recently on Google Play Store. It’s called Alternative Therapies for Cerebral Palsy and is available for free.

My aim is to create awareness about this condition. This is for parents and caregivers as well as the larger community. – Dr Riitesh Sinha, Inventor & Writer

The app carries a range of information on CP. Apart from basic information like signs and treatment, there are sections devoted to mudras that Dr Sinha has developed to cope with the effects of CP.These are vayu mudra, Mayan mudra, ari mudra and gyaan mudra.

A Limca Book of Records holder, Dr Sinha is also an activist and blogger. He has developed a pencil holding method and a foot-operated trickle that is useful for doing daily chores.

The app has largely received a positive response. Amishi Sharma, a students, says, “It helped me to get a lot of information about cerebral palsy. I have also been able to spread information among my friends, many of whom were unaware of the condition”.

Ranjan Sharma like the holistic approach. “Iy’s a wholesome and Holistic approach towards dealing with Cp. The creator has done a fabulous job in describing the minutest of details about the condition.”

“I have known Riitesh since a couple of years when he applied and won the Adapt Achievement Award“, says Dr Shabnam Rangwala, Founder, Project Noor. “His family has been very proactive and the app is a good step towards spreading information on Cerebral Palsy. I have shared my suggestions with him that it should move more towards the ICF model and speak about participation of people with CP.”