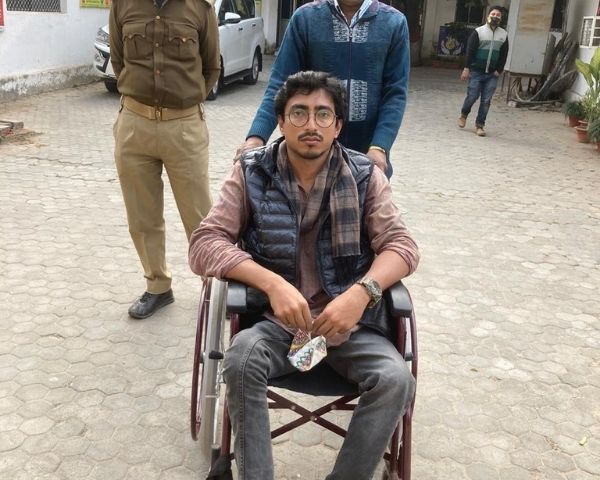 From accessibility during voting to enabling greater participation of people with disabilities in politics, emerging activist Harsh Raj has many ideas when it comes to mobilising India’s disabled community. Harsh, ]recognised recently by the Bihar government for his efforts towards ensuring accessibility in the recent state elections, shares his vision on My Take.

I was born without a disability. When I was five months old, I reacted strongly to a vaccination. The injection given to stop it led to a paralysis attack.

This took place in rural Bihar where I was living with my grandmother for a brief period. The medical support there was poor and by the time my family rushed with me to Patna, it was too late.

As a child I would watch other kids play and longed to join them. It bothered me that I was different from them. I would try and overcome this and crawl on my hands to play with them, but the way people stared would discourage me.

Paralysed due to medical negligence

School life was hard. Classmates would mock me saying “Ghoda jaa haha hai” (A horse is going). The bathroom was not accessible, and I would have to crawl on my hands to use it leading to frequent infections. Due to these reasons, I stopped going to school from class 2 and was taught at home. My parents, determined to send me to a mainstream school, kept looking out but it was only in class 8, that I found a school that was willing to enrol someone like me.

At Shivam Convent in Patna, I found support and wanted to study engineering. I got admission into an engineering college outside Bihar, but my parents were reluctant to send me. Later they let me move to Delhi for further studies after my brother enrolled in a college there. I did a master’s in applied economics at Jawaharlal Nehru University (JNU), with my research focus on Participation of PwD in the Labour Market.

You could say my activism truly began here. For the first time I understood the need for accessibility due to the barriers I faced that came in the way of fully participating in my studies. I filed RTIs on the accessibility facilities at JNU centres and pushed for ramps, wheelchair accessible toilets and facilities for visually impaired people.

Shaping of the activist

Shortly before lockdown I came to Bihar. Unlike many other disabled people, I was lucky to have the means to fly down to Patna but there were many others who were stranded. Unlike the migrants they got no attention. No one was talking about how disabled people were affected by the lockdown, not even the prime minister.

This year, Bihar held its first Assembly election after the Rights of Persons with Disabilities Act. It was an opportunity for me to push for accessible voting facilities as mandated by the Election Commission. While working with the State Disability Commissioner in Bihar, it was evident how little people with disabilities counted for political parties. Caste and religion are factors but not disability. Doing field surveys, disabled people shared the barriers they faced during voting like lack of ramps, Braille voter slips, transport, etc. Visually impaired people said they were made to vote anywhere and everywhere by poll officials. I put all this in a report and shared it with the State Election Commission. None of this was taken into consideration, however.

Presently I am working with state government officials on a proposal to enable direct cash transfers to people with disabilities so they can bear the costs of education and other expenses. In our experiences with the PwDs in we think that the only workable solution for people with severe disabilities. Similarly, if any scheme like a Universal Basic Income is piloted or seriously undertaken in India, it should start with the most vulnerable group: the disabled.

I have launched an NGO called Yogya which aims to get more disabled people to participate in politics. For a change political representation is necessary. Else we will not be heard.