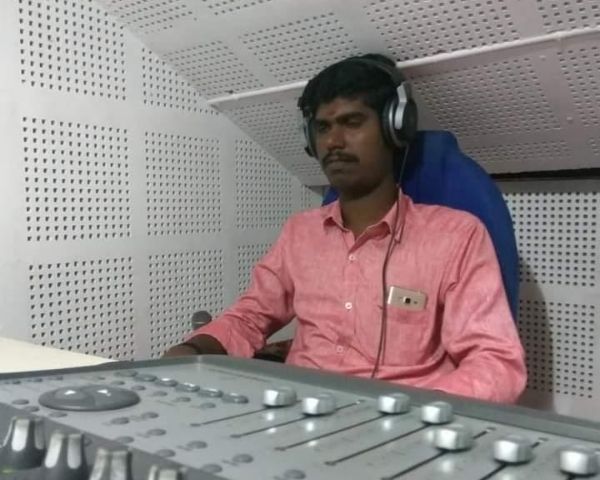 Sanoj Puramattom’s love for music knows no boundaries. So a visual impairment did not stop him from chasing his passion for the art. Popularly known as RLV Sanoj Puramattom, this 28-year-old is reaching out for the stars. Sanoj is sure that his dedication, hard-work, topped with passion for music will take him to heights. He has already composed fifty songs in his short career span, and more is yet to come. Sanoj talks to Newz Hook about his dreams and aspirations.

Thankful for an inclusive childhood

Sanoj hails from Tiruvalla, a small town in Kerala. He had a visual impairment by birth, but completed his schooling from a regular school nearby his home. As a child, Sanoj remembers, he had to face various issues due to lack of accessibility and also society’s lack of awareness about disabilities.

When he talks about completing his education at a normal school, Sanoj says, “There are two sides to it. I studied everything by hearing and I only used scribes to write my exams. The other side is that I could learn using computers, just like how most blind people did. So there were options”.

Sanoj is thankful to his parents for putting him in a normal school. Here is why. “It is only because of my upbringing in a normal school that I could handle being with others and felt just like one amongst them”, he points out.

He also says that travelling, for studies and work, helped him become more independent, confident and stronger in a world which is not disabled friendly or inclusive at all.

When one talks to Sanoj, you just cannot miss his positive attitude towards life and determination to work hard.

Sanoj says that ever since he remembers, music and singing has been his passion. But he took it up seriously at the age of twelve. To pursue higher studies in music, he became part of the famous RLV Music College in Thripunithura where he did his under-graduation in music.

2012 is an unforgettable year for Sanoj because he debuted as a music director that year. His songs for the devotional album on Lord Ayyappa won him many fans. He was just pursuing his second year degree during that time. “It was more like an experimental work for me, but glad that I got to taste music direction at a young age”, says Sanoj.

Every Independence Day, for the past few years, he has been composing music for ‘Swathantha Geetham’, an ode to freedom fighters. His 50th song was released recently. Most of his works are devotional songs, but Sanoj isn’t stopping there.

“It is just that I’am getting opportunities to tune mostly devotional songs. My latest song is on how everyone must stay together in spirits during these Coronavirus times. The song is written by my friend Bindu Santosh. The song which has already been released will also have a Hindi version to it”, says Sanoj.

“Rather than thinking about what I don’t have, I would rather stay happy thinking of things that I have. There is no room for sadness in my life. I want to make the best out of everything”, signs off Sanoj who is still learning music from his guru Kummanam Balachandran.

Sanoj considers music director Raveendran and Dakshinamoorthi as his role models. His biggest supporters are friends Bindu Santosh and V Harikumaran Namboothiri. His parents have stood by him through thick and thin.