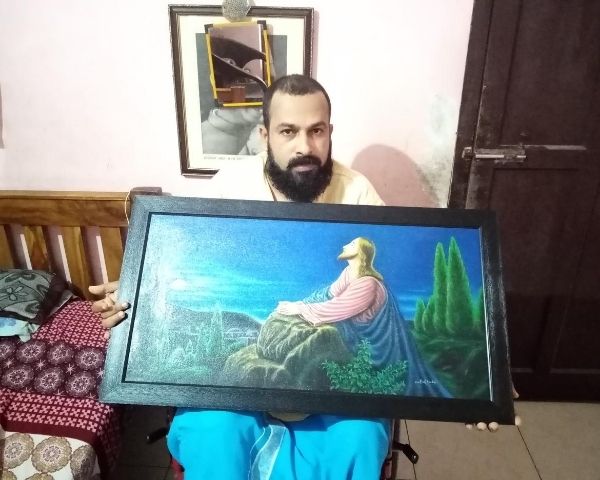 Santosh, 37 years old, is an artist from Kochi known for his skills and talent in art. Santosh, who was working with an advertisement company, met with an accident in the year 2012 which affected his spinal cord that left him as a paraplegic for life. Today, he drives an auto to support his family. In spite of the many hardships, Santosh is trying to make the best out of life.

A perfect family, a job of his choice, life was going perfectly well for Santosh when tragedy struck him on the fateful day of 14 August 2012. Santosh met with an accident that changed his life forever. A spinal injury from the accident left him on a wheelchair for the rest of his life. Now 37 years old, Santosh is struggling to make ends meet. A born artist, this youngster who lives with his family in Kochi works as an auto driver. He says it is, ‘survival of the fittest in a tough world’, but the hurdles that he crosses everyday are many.

Santosh was born and raised in Thodupuzha, a small town in Kerala. Art was in his blood. Most of his family members were artists. So Santosh quit studies after class 10 to pursue his love for art. He attended a few drawing classes to get the basics of the art. Oil, enamel, acrylic, Santosh loved painting using everything. He had a lot of support from his family too.

As his wish, Santosh landed a job with an advertising company. He used to paint hoardings for ad companies. He could travel across Kerala, something that he always loved doing. In spite of getting numerous calls from films to work in their art section, Santosh chose a job with ad companies because he could do the work of his choice and also got enough time to spend with his family as well.

Santosh’s wife and two children are his big assets. Life changed on 14 August 2012. Santosh was painting when he accidentally held on to a high-voltage electric line due to which he was electrocuted and fell down. The accident injured his spine severely. He was in the ICU and ventilator for almost eight months. Financially, Santosh and his family underwent the worst times as the hospital bills piled up close to lakhs of rupees. The company in which he worked was willing to pay only a very meagre amount for his treatment.

Santosh had to find ways for his treatment. Life started falling downhill from there. After being discharged from the hospital, in order to support his family, Santosh had to get back to art. Meanwhile, he started driving an auto as well.

Before the accident, Santosh has worked as an artist with some renowned ad companies in Kerala.

One of Santosh’s expertise is creating art-works out of smoke from kerosene lamps. A traditional art-work method, Santosh is a professional in it. A steel plate is kept on top of the kerosene lamp. The smoke from it is then used to create beautiful landscapes and portraits. Called ‘stump art’, it is one of the age-old methods of creating art-works.
Some of his works take more than 70 hours. This is because Santosh believes in perfection.

Due to financial constraints, Santosh is riding an auto in which he transports goods, mainly steel rods and other construction items. His two children who are studying are also budding artists. Santosh is determined to help them complete their studies so that they can choose their paths in life.

“I recovered and bounced back to life, thanks to my supportive friends and a group of good people around me. It is these people who sponsor most of the things for me because fending for myself and my family is a difficult task for me now”, says Santosh.

Santosh has done a few surgeries. He is able to move around with the help of his wheelchair. Even now, Santosh has bills of up to Rs 15 lakh which are yet to be paid to hospitals.

“I take a lot of risk every day to support my family. A person with disability driving an auto to carry heavy load is not something that anyone would appreciate. I carry five meter pipes some days in my auto! I do not have a choice because I have stomachs to feed. Never lose hope, I believe in that”, says Santosh who considers Mahatma Gandhi and Abraham Lincoln as his role models in life.

In spite of the many difficulties, hardships and financial constraints, Santosh is trying to make the best out of life. Art has helped him recover. The cheerful smiles of his children makes him stronger. But he knows the path ahead is one with many obstacles and hurdles.