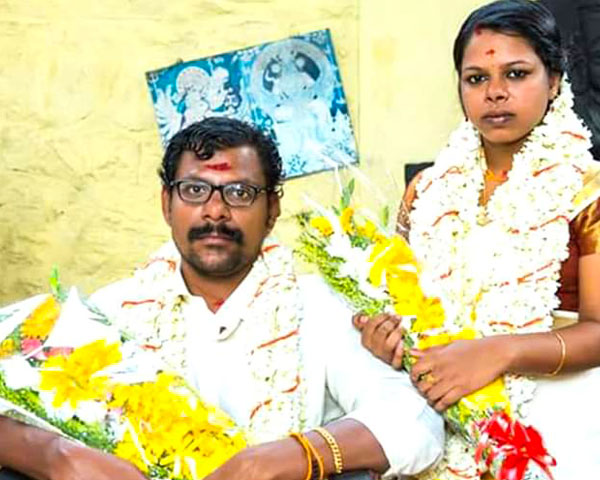 In our month long series #AllYouNeedIsLove, today we feature Sarath Padipura and his wife Amrutha. Sarath, who is a wheelchair user, got married to Amrutha on June 2016. The couple have beaten all odds to stay together.

Sarath Padipura and Amrutha have been married for over three years now. But every day is a new learning curve in their relationship. Sarath, who is a wheelchair user, ensures that his wife gets nothing lesser than the best in life. In spite of the many odds and obstacles in life, the couple shows us what true relationship goals are. Their fondness and love for each other is growing as each day passes.

Just like every other youngster, Sarath had big dreams in life. This youngster, who hails from Perumbavoor in Kerala, wanted to support his family and ensure their well-being. After completing his studies, Sarath worked with different companies in Tamil Nadu and Gujarat. He later returned back to Kerala to spend time with his family. He wanted to earn and do good things for the society.

Fate struck him in the form of an accident. While riding his bike, Sarath hit a lorry that left him with a spinal cord injury. For over two years, he locked himself inside the four walls of his home. He went into depression after realising that he has a disability.

Good words from doctors, his family and friends, nothing could uplift him. That was when he attended an event organised by Palliative Care. He met many others like him. This changed his outlook towards life. Sarath decided to step out and do things that makes him happy, a decision that he says was the best one he has made till date.

Sarath is an ardent singer and he is also one of the co-founders of music troupe ‘Freedom on Wheels’. A group of musicians on wheelchairs, Sarath and his team performs across Kerala. During one of the events, he met Amrutha. The relation that started off as friendship soon turned to love.

Ever since the beginning, I knew that Amrutha was noticing me a lot. Soon after having conversation, we exchanged phone numbers and started talking very often. As soon as we got to know each other, we decided to be in a relationship. She later told me that she wanted to get married to me. Initially, I did not agree. I asked her to speak to her parents. Since the last three years, she has been with me through thick and thin.

The couple had their first child Avani last year. Avani’s birth has made their lives more colourful and fun too. Sarath, who runs his own business, is active in social work too.

Amrutha’s parents were reluctant to get her married to Sarath. They did not want their daughter to get married to someone with a disability. But Amrutha, who had made up her mind, left home to get married to her soul mate. The couple had a registered wedding and then a small function at a nearby temple which was attended by Sarath’s family and close friends.

But things changed for the better a couple of years back when Amrutha’s family came forward and decided to support them.

Today, the couple spends time together by travelling and getting to know new people. Both Sarath and Amrutha says that this is the life they have always dreamt of.

Relationship for a life time

Sarath says that looking at positives and strengths of the person is what makes any relationship sweeter. “We never look at our drawbacks or negatives. Both of us appreciate good things in life. We are blessed with a great supportive family. During our free time, we love travelling”, he says.

Amrutha says that she initially felt sympathetic to Sarath. But later that changed to love. “Sarath had told me that a disabled person like him can never get married. But I wanted him to change that attitude. He is one of the most lovable and caring person that I have come across in life. Even if we have a fight, we make sure to patch up soon. I think he has done more things for me than what a person without a disability would do”, she says.