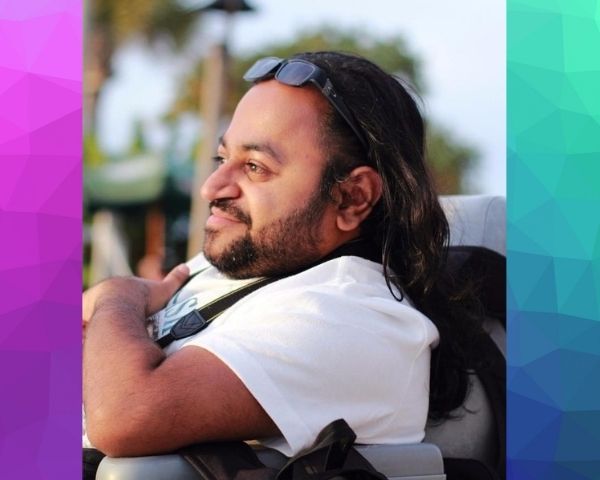 Saswat Kumar Swain from Bhubaneswar was born with Brittle Bone disease due to which he had numerous fractures. A wheelchair user, Saswat works with a leading MNC and is currently at Gothenburg in Sweden as part of his project. Saswat talks about his early diagnosis, work, and thoughts on accessibility and future plans.

Born and raised in Bhubaneswar, 39-year-old Saswat Kumar Swain today works for an MNC and lives in Sweden. A wheelchair user, Saswat was diagnosed with Brittle Bone Disease or Osteogenesis Imperfecta (OI) soon after birth. Being someone who always believes in himself, Saswat is all about positivity and smiles! He talks about his journey to Newz Hook from Gothenburg in Sweden.

A disability diagnosis and early years

Saswat says that his parents recollects he was born with broken bones due to which fractures became a regular thing during childhood. Within a few days after birth, he was diagnosed with OI. He remembers his last fracture was while studying in class 1.

By the age of five, his parents tried to admit him into a school, but most schools were not inclusive and hence was not open to having a child with a disability. But a school near their home opened gates for Saswat and thus began his journey towards seeking education.

“During first few months, my parents carried me to school and back. Most of the days, they even stayed inside the campus till my classes got over. Then I started going on my own since my sister was also there with me in the same school. I was blessed with good friends and teachers. Since I was an extrovert, I did not have a tough time mingling with other students. But the infrastructure was not accessible and someone had to always carry me. But I always got help”, says Saswat.

He completed an engineering course in electronics and communication and also started using a wheelchair which helped him become independent. Saswat knew that life was not a cake walk, but was determined to make the best out of it.

Making a mark in the corporate field

Though Saswat started working for a company in his home town at Bhubaneswar, he gradually moved to Kolkata. Later, he shifted to Bengaluru to work with the leading MNC Accenture. He was in the USA for a while, returned to Bengaluru and has now shifted focus to Sweden. As part of projects from Accenture, Saswat could travel quite a bit.

Currently, he works as a Software Architect. Having worked with Accenture since the year 2006, Saswat has only good words about his company and colleagues.

Work is worship for Saswat who believes in giving his best for the company that he works with.

“I have been in Sweden since the past two years. I have also lived in the USA. In both places, accessibility in public places is way better than what we have in India. Being a wheelchair user, I could go to places independently, but that would be a distant dream in India”, he says.

According to him, travelling in public transport in India was impossible. “Once I reach office, it was fine. But to get there was a struggle”, he says, stressing on the need for officials to take up accessibility seriously.

Ask him what his future plans are and Saswat has a quick answer. “I do not plan ahead. Right now, I’am in a good space. I’am focusing more on becoming independent and creative”, says Saswat whose parents and sister are his biggest supporters.