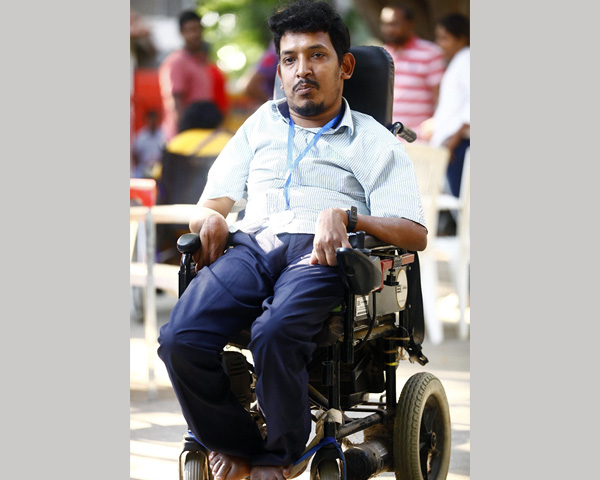 31 year old Sathish Kumar, a wheelchair user from Chennai, is a Boccia player. He organises Boccia camps as a part of Ektha Foundation’s ventures. Ektha is an NGO that promotes para sports in Chennai. Sathish has participated in national and state level championships. Last year, he won a silver medal in the national games. Sathish hopes to take Boccia from India to international platforms. He has been instrumental in moulding Boccia players to bring laurels for India.

Sathish Kumar became a Boccia player by chance. His tryst with the game dates to almost four years back. Today, Sathish is the co-ordinator for Boccia games at Chennai’s renowned Ektha Foundation. A wheelchair user from Chennai, Sathish has been instrumental in teaching the exclusive Paralympic game to many people with disabilities. In 2018, he won a silver medal in the national event. He has participated in Tamil Nadu state level games as well. Sathish shares about his love for Boccia game.

Sathish claims that Ektha Foundation was one of the first few organisations to introduce the game to India, especially in Tamil Nadu. A renowned Boccia player from the United Kingdom visited Chennai and happened to meet Ektha’s founder Rajiv Rajan. Soon, Harikrishnan and Rajiv together decided to take the game a step ahead. They looked into the many ways through which they can spread the game across people with disabilities. One amongst the first people to become a part of the team was Sathish.

Sundaraman Kannan and I were nominated as co-ordinators for the game for Chennai and nearby areas. That is my first encounter with boccia. I underwent formal training under the guidance of experts. In 2016, we attended a training session at the Rural Development Trust in Andhra Pradesh. They are pioneers in sports. In fact, their players have participated and won laurels in international games. Receiving Boccia training from there helped me a lot. – Sathish Kumar, Boccia player.

Thus began Sathish’s journey with Boccia game. Sathish, under Ektha Foundation, held many Boccia camps across Tamil Nadu. “During childhood, I was never keen on sports though I used to play some indoor games. I started playing for tournaments after becoming a Boccia player. I was unsure about how well I can do it. But Rajiv and Harikrishnan supported me a lot”, says Sathish.

This youngster explains how the game is played. “There are 13 balls with one white ball which is the main target. There are six red and blue balls respectively. Towards the end of the game, whichever colour is close to the white ball wins the game”, he says. The unique part about Boccia is that it can be played as a big team, pair or as individuals. The game is said to have many benefits to people with disabilities, especially those who have limited mobility. “Boccia is exclusively for people who cannot move their hands or legs, especially those with disabilities like cerebral palsy or muscular dystrophy”, says Sathish, who works with a leading bank in Chennai.

Empowering other people with disabilities

This 31 year old says that he used to travel over 20 kms up and down every weekend just to practice the game. “For many people with disabilities, Boccia is truly a gift. They can come out of their homes to play this game. At Ektha, we organise regular sessions. We are trying to expand the game to bigger platforms”, he says.

Sathish has been instrumental in teaching the game to many people. That is precisely the reason why the Boccia team at Ektha looks up to him. Naga Manjari, one of the Boccia players, was introduced to the game for the first time by Sathish. “My daughter used to love cricket. She always felt bad that she couldn’t play the game. That is when she got introduced to Boccia. Sathish ensures that he teaches Naga Manjari slowly and patiently. His encouraging words have made a huge difference to her love for the sport. Sathish constantly supports her and makes sure to bring the best out of her”, says Naga Manjari’s mother Anandi.

“Sathish is supportive. The best part about him is that he organises all the Boccia game events very well. He is more like a friend to us”, says another player Lakshmi Prabha.