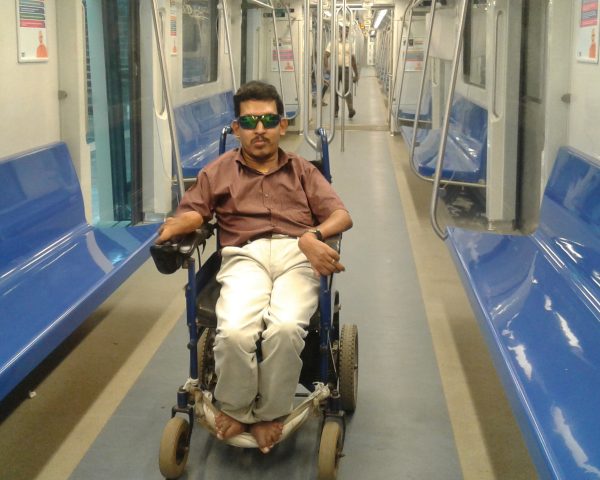 Satish Kumar, a wheelchair user from Chennai, recently started an online petition which is addressed to top officials. The petition highlights need for connecting Velachery to Vandalur as part of the Chennai metro rail phase 2 extension. The petition in Change.org has received over 1500 signatures.

When Chennai metro rail facility was launched a couple of years back, it was inaccessible for wheelchair users. In one of the incidents, the wheelchair of city based disability rights Smita Sadasivan got stuck in between the platform and the rake raising safety concerns of metro rail for passengers with disabilities. After that, officials stepped up and enhanced the facilities. Today, many wheelchair users across Chennai use the metro rail facility to commute across the city. Yet, there is more yet to be done.

Satish Kumar, a wheelchair user and member of the NGO Ektha Foundation has started an online petition asking top authorities to connect Velachery to Vandalur as part of the Metro Rail’s Phase 2 extension.

Satish’s petition is addressed to Prime Minister Narendra Modi, Union Minister for Civil Aviation Hardeep Singh Puri and Tamil Nadu Chief Minister Ei K Palanisami. Being one of the busiest routes in Chennai city, connecting Velachery to Vandalur will be of help to both people with and without disabilities who are struggling to move from one place to another in Chennai traffic.

There are hardly one or two public buses that have wheelchair accessible facilities. They don’t ply to all the routes and at times when we need them. So Chennai metro is the most accessible mode of public transport for wheelchair users in the city. There are braille facilities for visually impaired travellers and even tactile floors. So people with disabilities can travel independently. Half of the city is connected as well. –Satish Kumar, Petitioner

Reportedly, Vandalur, a busy commercial area, is going to get their first main bus stand. Buses from different parts of the state will be plying from here. “Many outstation buses will be halting here. Hence, it is easier if they have a metro access to this place. This will benefit many people”, says Satish.

His petition in online platform Change.org has received over 1,500 signatures. He is hopeful that more people will step up and help him reach maximum numbers very soon so that he can send it to concerned officials. “There are many offices and colleges in the stretch from Velachery to Vandalur. The whole city can be connected if the metro facilities are expanded. I started this petition on 2 October and have been getting great responses”, he says.

Sonu Bharadwaj who signed the petition comments, “This petition is something I have been expecting to come up with for about a two and half months ago. Making the farthest corners of the city reachable in no time. I strongly believe the possibility and hereby request the Government of Tamil Nadu to consider this petition and extend phase 2 metro project”.

Also Read: People with disabilities in Chennai gets an underwater experience, thanks to Ektha Foundation