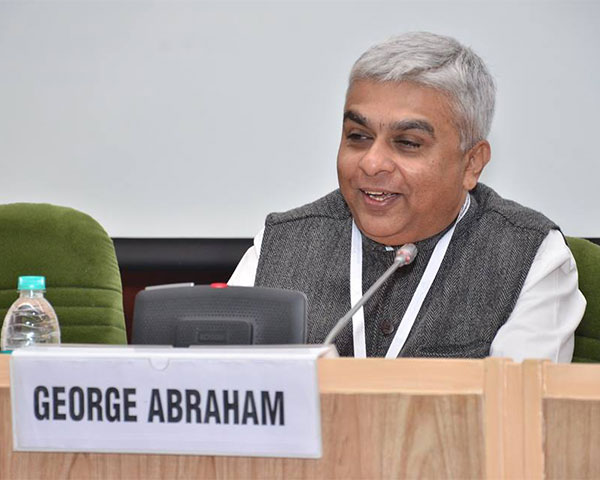 Score Foundation, founded by New Delhi based George Abraham, has been providing various services to visually impaired people from across India since the year 2002. Abraham shares his inspiring journey with Newzhook readers.

New Delhi-based George Abraham became visually impaired when he was barely 10 months old. Disability did not stop him from exploring the world and looking for ways to empower other people who are blind and low vision. In the course of his extensive travels, Abraham realised there was complete lack of awareness and this led him to start Score Foundation, an organisation that works to empower visually impaired people in India.

Started in 2002, Score Foundation has reached out to thousands of visually impaired people from across the country. Abraham’s relentless efforts have truly paid off.

An ardent cricket fan, Abraham introduced blind cricket in India in the 90s and organised national tournaments. He went on to hold a Blind Cricket World Cup tournament in 1998 in New Delhi. He has also held over 60 workshops for blind youngsters on communication and skill development. Abraham realised that his true calling was working towards welfare of blind people, and that is what he strives for even today.

While travelling around, I met people from corporate and education sectors, politicians and parents of blind people. I realised that there was sheer lack of awareness about the disability. It was either extreme sympathy or a feeling of hopelessness towards a blind person. That is when I felt that people must be made aware of the potentials of blind people. Score Foundation was the ideal way to reach out. – George Abraham, Founder, Score Foundation.

Abraham launched the Eyeway Team and set up a website for visually impaired people. This is a source of information for the community for issues ranging from education, employment, technology and disability rights and laws.

In 2005, Score Foundation launched a radio programme Eyeway Yeh Hai Roshni Ka Karawan which was broadcast in six metros by the All India Radio (AIR). Soon, the team started getting many calls and Abraham decided to start an exclusive helpline number. “Those who wanted guidance on anything could give us a call. As we expanded, we had to find ways to disseminate information”, explains Abraham. This was followed by a TV series in 2013 called Nazar Ya nNzariya with over 13 episodes of stories of visually impaired people and ways to empower them. All the programmes created by Score Foundation focussed on key elements that go into the upbringing of a blind person.

Going one step further, Eyeway started started operating in Malayalam, Kannada, Punjabi, English and Kashmiri languages and are currently working on launching in Tamil, Telugu and Oriya as well. Eyeway has now become a network of organisations which together share information and connect different services for visually impaired people. Score foundation also ensures to take up advocacy when discrimination happens.

“Score foundation does not aim to become a corporate entity. We believe we still have a long process to go through, and we are travelling around and meeting different people. Our aim is not to build an institution, but to mobilise people towards their goals. For that, we do not need a huge team”, says Abraham.

Through rigorous efforts, communication and hard-work, team Score Foundation is on their path to empowering more visually impaired people.

Maitreya Shah, a visually impaired law student, says Eyeway has empowered many people from the community. “They provide counselling and assistance to parents of visually impaired people to name just a few of their works. Many blind people have queries about their disability and how to go about doing things in general. So a service like Eyeway is definitely of immense help. I have come across many people sharing successful incidents after contacting them”, says Shah.

ALSO READ: A Bengaluru holiday led to the start of this NGO that reaches out to visually impaired people