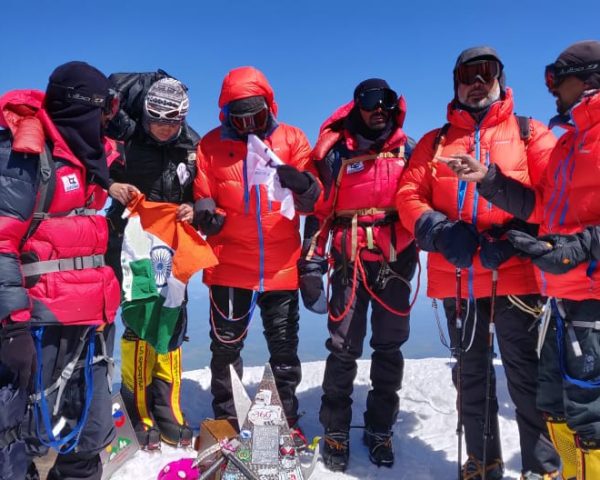 Sekhar Goud, a triple amputee from Hyderabad, is the first Indian to scale Mount Elburus, the 10th most prominent peak in the world located at Southern Russia. Sekhar did the trek with seven Indians and a Russian guide.

One of the most sought after trekking spots in the world, Mount Elburus located in Southern Russia is truly scenic. Snowcapped throughout the year, Elburus is regarded as a trekker’s paradise. Sekhar Goud, a seasoned trekker from Hyderabad, is a triple amputee who loves challenges. Along with team from Hyderabad, Sekhar decided to check out Elburus.

The team from Hyderabad was headed by Bharat Thammineni who owns Boots and Crampons, a training academy for trekkers. Along with six others and a Russian guide, they climbed the peak in seven days.

Sekhar, who was left disabled due to electrical burns, says he ensures he has a great support system always.

I have already done Everest base camp and Mount Elburus Summit before. But it is not an easy task. It is one of the most difficult mountains that I have climbed. But I had a great support system along with Bharat who made it easy for me. Climbing up was fine, but while coming down I fell down twice. It was a narrow escape. Bharat and our guide had tied ropes on me and that is the reason I’am still alive. But it was a great experience. In fact, I had mixed feelings before climbing. Now, I feel great. – Sekhar Goud, Trekker

This youngster believes that nothing is impossible, and he wants to go by the motto. “Why should anything stop you if you are an amputee? Sky is the limit. Amputees can do anything done by a person without disabilities”, he says.

The team was divided into batches so that they can help each other while climbing. Bharat, who has trained over 1,000 people in his career span, travels around the world trekking new places.

Arun Kumar Tiwari, who works with a company in Hyderabad, was part of the trip as well. Arun said that he learned many things trekking with Sekhar. “I have been mountaineering since the year 2015. I met Sekhar last year and he is very competent. He has overcome his disability and I feel he is no way lesser than a person who is not disabled. It is truly inspiring to watch him”.