Shahana gets married to Pranav, a wheelchair user, in a modern-day fairy tale romance 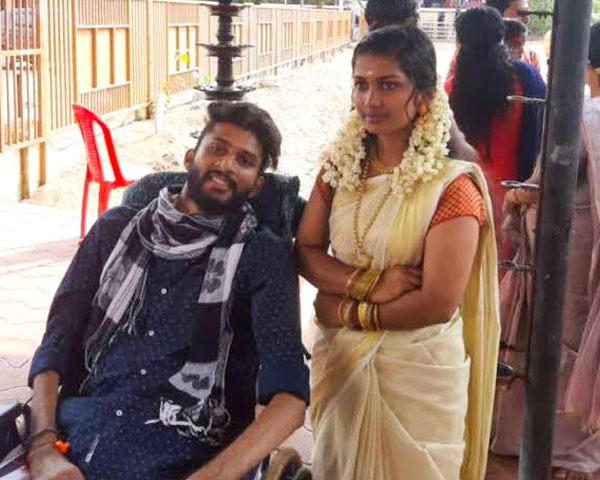 19 year old Shahana got married to 28 year old Pranav who became paralysed after a bike accident six years ago. Shahana left her home and family to get married to her soul mate Pranav whom she met on social media six months back. They got married at a famous temple in Kerala last week. Their wedding pictures are going viral and netizens have been flooding the couple with blessings and good wishes.

“To love someone is to see a miracle invisible to others” is a famous quote from Francois Mauraic. 19 year old Shahana saw her soul mate in 28 year old Pranav who has been paralysed for the last six years. Pranav, who is a wheelchair user met Shahana on Facebook. The couple got married at a temple in Kerala last week. Their beautiful wedding pictures have been going viral on social media ever since then.

Shahana lived in Thiruvananthapuram with her family. While Pranav was a native of Thrissur. He met with a bike accident six years ago which left him paralysed. But that did not stop Pranav from living life to the fullest. He had a bunch of great friends who supported him through thick and thin. They travelled together and had the best times.

Pranav used to post all the videos on his Facebook too. That is how Shahana, who was his Facebook friend, started noticing him. It did not take too much time for her to fall in love with Pranav and his positive outlook towards life.

Fighting all odds for love

It was one of Pranav’s videos that grabbed Shahana’s attention first. She immediately found out his contact number on Facebook and rang him up. In a couple of days, she expressed her love for Pranav who was hesitant and unsure at first.

They used to talk over the phone for over six months. Within that time, Shahana realised that she wanted to spend rest of her life with Pranav. Both Pranav and Shahana’s parents were against their love In fact, Pranav’s family called her up to see Pranav’s condition hoping that she would back off. But her love only grew after their first meeting.

Pranav’s family and friends accepted her whole-heartedly. Their wedding was held at the famous Kodungalloor temple in Kerala. Shahana’s parents who refused to accept their love, has not contacted them ever since.

In spite of all the odds and obstacles, the couple have finally found their true love in each other. Netizens wouldn’t have missed their beautiful wedding photos that are doing the rounds on social media.

Netizens showered the couple with love

“One of the best and most positive news heard in recent times. It is a love marriage where a Trivandrum girl fell in love with a Thrissur boy. The best part she is a Muslim girl who fell in love with a Hindu boy who is paralyzed due to bike accident six years ago. His videos were popular in social media that is how she came to know him. Boy and his parents dissuade her to not fall in love with him. Her own parents tried to prevent her. But she believed in him and got married. After the accident the boy thought he will never get married. But now he got married. Best wishes to #Pranav and #Shahana. This is a clear example humanity is greater than religion and disability. This is the kind of girl every man wants”, commented Anoop Muraleedharan.

“May God bless you both be share your love always. Wishing you the best”, commented Renjith Maoharan.