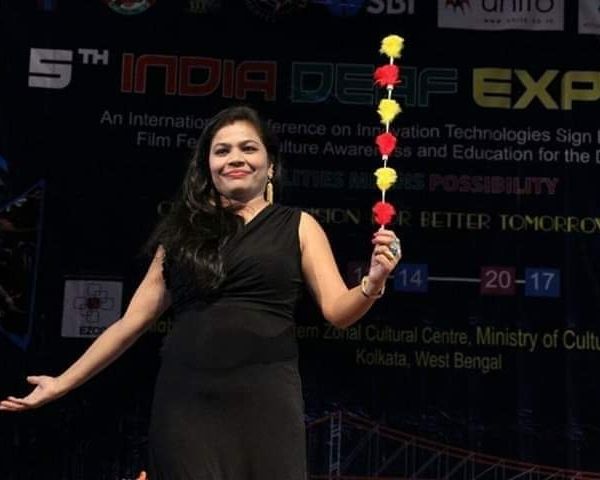 In our monthly campaign #CelebratingGirlPower that brings stories of strong, determined women with disabilities, today we have Sheetal Kimmatkar from Nagpur. Sheetal who is a dancer, actor and magician, was born deaf. She believes that there are many opportunities for deaf women, all that they need is to explore.

39-years-old, Sheetal Kimmatkar hails from Nagpur in Maharashtra. She was born deaf and her diagnosis happened at a very early age. Sheetal dons different roles with ease and perfection. She is a wife, mother, dancer, actor and magician. Needless to say, Sheetal has beaten many hardships to reach heights. She hopes to empower deaf women and reach out to them when needed.

A disability diagnosis and life thereafter

Sheetal says that her parents were watchful of her right from birth because her elder brother was also deaf. But he had many other health complications owing to which he passed away a few days after Sheetal’s birth. Her mother noticed that she wasn’t reacting to sounds soon after which Sheetal underwent a diagnosis.

Sheetal’s mother made sure that she attended school for deaf children nearby their home. Everything was taught orally and teachers never used sign language. Thanks to her mother’s care and unending support, Sheetal could complete class 12. She also ensured to complete B.Com through distance education.

Currently, she is living with her husband who is also deaf, his family and 12-year-old son. She has all the support from her own family as well as her husband’s.

Sheetal is a renowned magician who has performed at various national and international venues. Her tryst with magic started in the year 2001. Late Gokhade, a wheelchair user, who is also a mentor to Sheetal, is the one who first introduced her to magic shows. In one of the shows that happened in her home town, a woman magician blew off minds of the spectators. That is when Sheetal thought why there are hardly any women magicians! Sheetal decided to try her luck with magic and Gokhade supported her.

During those days, Sheetal was active in dancing and modelling too. Her first magic performance was on 2001 Independence Day eve in front of a huge crowd which included disabled people too. After the grand success of the event, Sheetal decided to pursue this as a career.

To begin with, she performed at various festivals and events across Maharashtra. In her career span, Sheetal has performed in USA, Europe and other countries. She has won prizes and awards there as well.

She has also participated in many dance shows and are part of dance troupes. Her acting skills have been appreciated at many venues. Sheetal, who has done over hundreds of magic shows, is truly unstoppable.

Working for the real case

“Growing up with a disability was never easy because I have been mocked and discriminated at various places”, recollects Sheetal. But all that negativity couldn’t stop her.

According to Sheetal, working towards empowerment of deaf women is something close to her heart. “I want to train them so that they can build careers as magicians or whatever that interests them to become independent. Generally, there are many misconceptions about women about what we can and cannot do”, she says.

Sheetal also says that there are numerous NGO’s and organizations that work towards helping disabled people, but very few that works for women empowerment and helping women find jobs. Sheetal aims to bridge those gaps. “Someday I hope to start an organization to teach magic”, says Sheetal with a smile.