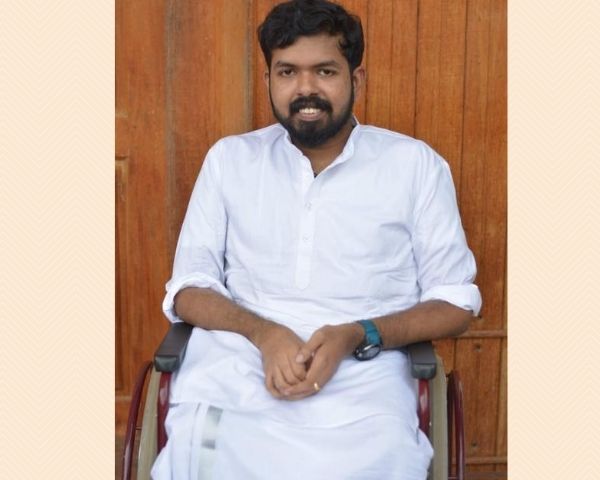 30-year-old Shinu Varghese was diagnosed with Spinal Muscular Atrophy (SMA) at a very young age. In our today’s feature for the monthly campaign #RaiseAwarenessAboutSMA, Shinu, who has found his path to empowerment, talks about the different roles that he dons in life.

‘Nothing is impossible’– Shinu Varghese from Thrissur in Kerala believes that. This 30-year-old, who is a wheelchair user diagnosed with Spinal Muscular Atrophy (SMA) has struggled a lot in order to establish himself. He has donned many roles. Shinu is a writer, reporter, public speaker and also has his own YouTube channel. Currently, he runs a tuition center at home. Shinu talks to Newz Hook about what makes him a strong person in spite of his physical limitations.

According to Shinu, his parents noticed that his physical development was slow at a very young age. He wasn’t moving around when other children of his age did it. In the early nineties when this happened, there was no awareness about disabilities and that made it worse. From Ayurveda to Acupuncture, the worried parents tried it all, but in vain.

They finally found the answers that they needed at Kovai Medical Center, a renowned hospital in Coimbatore where Shinu was diagnosed with SMA after conducting a biopsy. “In fact, doctors told my parents that I would live only till about four or five years of age. There was no treatment or medicines for SMA”, says Shinu.

His parents admitted him to a nearby school where he completed his studies. A separate wheelchair was kept at the school for Shinu. An ardent fan of world history, Shinu took up the subject for his under-graduation. “At school or college, I haven’t really faced any discrimination based on my disability”, remembers Shinu.

After completing college, Shinu worked with a company, pursued a computer course, worked as the sub-editor with an online media before running his own tuition center which he currently does. He is also a public speaker who loves to pen down his thoughts. Shinu tells that he is a staunch atheist. He wants the younger generation to think and believe in science and logic rather than fall for religious ideologies. “That is one reason why I began a tuition center so that I can reach out to many children”, he says.

There are over ten to fifteen students at his center. Shinu takes classes for all subjects for students of all age groups. An ardent fan of reading, Shinu plans to write a book very soon.

He also has his own YouTube channel where he shares some interesting recipes to his viewers along with the support of his wife who is also a wheelchair user. “It is important to always be engaged in something. Do not think that you are impossible of doing things. Never stay negative”, says Shinu.