For 11-year-old Shreyan Chakraborty, keyboard is his best friend & music is therapy 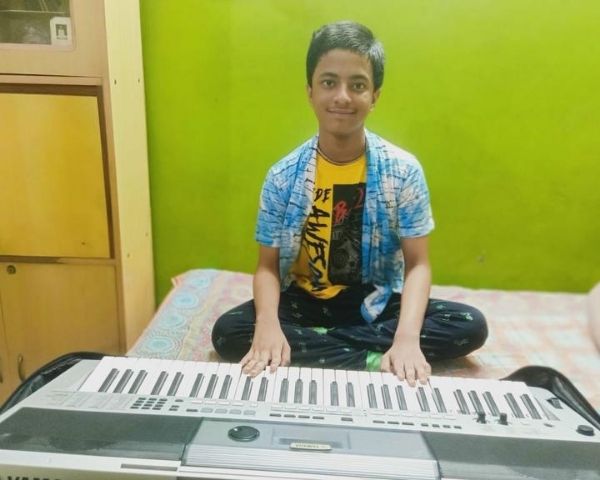 Shreyan Chakraborty, 11 years old, is a keyboard player who was diagnosed with autism at the age of two. A student of class 7, Shreyan plays the keyboard beautifully and has performed at various venues including a national event. Determined and skilled, Shreyan hopes he can build a career in music.

Shreyan Chakraborty’s love for music has no boundaries, specifically for playing the keyboard. This 11-year-old who lives in Delhi has already performed at various venues. An autism diagnosis has not come in the way for his passion for the art. With the support of his parents and teachers, Shreyan is determined of reaching for the stars. Read on to know more about the journey of this little musical prodigy.

Shreyan’s mother Joyashree Chakraborty remembers that he was diagnosed at a young age, when he was hardly two years old. Joyashree noticed developmental delays in her son. In fact, he showed most of the symptoms of autism. He had difficulty in speech which raised eyebrows amongst the family. As soon as Shreyan was diagnosed, Joyashree started therapies for him.

Early therapies was one of the best things that I did. I started therapies for Shreyan at a young age and that did help him a lot. He started responding to things in a better way and now he can communicate well- Joyashree, Shreyan’s mother.

Being a part of strong parent support groups that reach out to each other also helped Joyashree a lot. She could know better about autism from parents who have adult children under the spectrum. “They all gave some great advice and good feedback too. It is all about supporting each other”, she says. Needless to say, music was also a great therapy for Shreyan.

Currently, this youngster is studying in class 7 at an inclusive school in the national capital. Though he has some language and comprehension problems, Shreyan is determined to put his best foot forward academically too.

From a young age, Joyashree noticed that Shreyan was showing interest towards music. It was in December 2018 that he formally started learning the keyboard. “We tried many things for Shreyan, but keyboard is what clicked the most for him”, she recollects.

There has been no turning back since then. Shreyan ardently plays keyboard every single day! He loves the music that comes out of it. It relaxes and soothes him.

Shreyan is attending keyboard classes along with other children who do not have any disabilities. There are nearly 20 children at the center and Shreyan has no difficulty interacting and spending time with them. He has also played at numerous functions. In fact, he was the lead keyboard player of a group that performed at an event attended by the President and Prime Minister of India! “Shreyan also got a chance to meet them”, says his mother.

Shreyan hopes that he can play at more venues. He loves it when other people ask him to perform. When he grows up, maybe he can even seek a career in music.