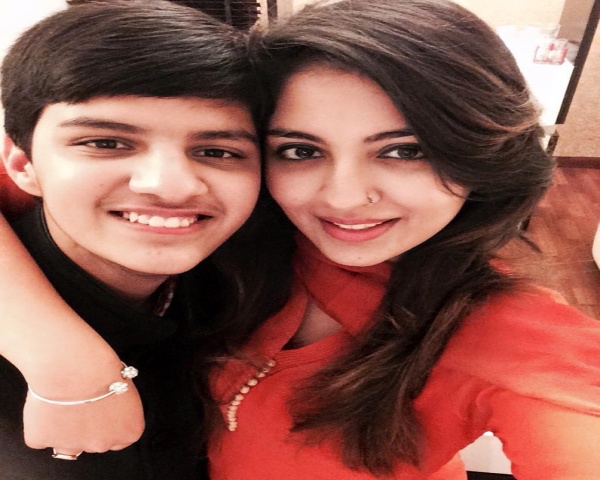 Our final story in the November campaign #SiblingPower is on Pranav and Nikita Bakhshi. Nikita is nearly six years older than her brother, who is on the autism spectrum. Fiercely protective of Pranav, Nikita says her brother inspires her to seek the best within her.

Nikita Bakhshi was eight years old when her parents had a diagnosis for baby brother Pranav’s condition. There were some signs that Pranav was different from other kids his age which led the Bakhshis’ to seek expert help. “Even before the diagnosis, there is always an intense period of doubt, confusion and analysis of the behaviour manifestations, which actually leads one to seek the diagnosis”, remembers mom Anupama Bakhshi.

What followed the diagnosis was a period of confusion as the family tried to understand what it meant. A close knit family, the Bakhshis’ found themselves battling with some of the commonly felt guilt that comes with giving priority to the needs of a child with disability. “The early years are definitely overwhelming and one strives hard to keep the head above water”, says Anupama. “There are difficult moments when one feels that the older sibling has been ‘abandoned’ as a lot of time and effort goes in coping with the diagnosis”.

Along side was the conviction that Nikita would be a part of all that was changing. There was never any one moment when the Bakhshis’ sat down with her and explained what was going on. Rather, it was a constant.

We never had a moment where we sat down and ‘autism’ was explained in one go as an affliction or something. It was a constant thing. “I have to go because Pranav is facing this challenge and we need to sort this”. “If you say it like this, Pranav will understand, this is the way he understand best”. I soon realised that my perceptive daughter has already deciphered the challenges in her own way and was so sincerely eager to help. The precise words that I used along the way were “Pranav has autism. It makes him hyperactive. We can sort this and Ma is working on it. You can help by….”. – Anupama Bakhshi, Pranav and Niktas’s mom

Nikita, who feels extremely protective of Pranav, has strong memories of those conversations. “I definitely did sense something in my own innocent way because he doesn’t behave like others. My mom explained everything to me, and she had the mindfulness to differentiate autism for him. So I saw him and treated him like my brother, not someone with autism”.

Not that it didn’t lead to difficult situations at times. Anupama recalls a time when Nikita was most troubled by Pranav’s manners. “When Pranav was about two and a half, Nikita, my most well behaved daughter, asked me innocently, “Ma, why did you not teach him manners?” I answered in detail about how Pranav would slowly respond to the way we provide our intervention as he was not learning the way she did. We do remember this conversation sometimes, when we see the amiable young Pranav around us!”

It couldn’t have been easy though for a child to grow up with a sibling who is seen as different. Nikita is candid about the challenges. “I will be lying if I said it did not affect me. I definitely felt anxious, especially when I saw people giving him the ‘stare’ as I didn’t want them to hurt my brother”. But there was never a sense of embarrassment. “Autism was just a part of him. I always knew he was meant to change the world, I was proud of him every single day for his courage”. Before long, Nikita became a “partner in the journey” as Anupama puts it.

“One has to strike a balance between eliciting the valuable support that a sibling can provide and burdening the sibling with responsibilities and resulting stress”, adds Anupama. “I somehow felt guilty about expecting a lot from her. An autism household is programmed to the needs of the child with autism so lot of adjustments are required. Even their play was sometimes structured in a manner that Pranav would pick up a skill. At the same time, I ensured that she had her own routines, activities and space that are not encroached”.

Today, Pranav, a keen photographer, is making a mark in the fashion world as the first Indian model on the autism spectrum. Nikita, who is currently in Australia, has chosen to work for people with autism as an advocate and mentor. A step that Anupama cherishes. “It’s a validation of her selfless love not just for Pranav, but the entire special community”.

For Nikita, Pranav has remained that one person who has shown the best of humanity, teaching her “patience, empathy, unconditional love, courage and motivation.”

“He has inspired me in so many ways”, she adds. “He is a perceptive child and knew something was wrong. Even when people who were around him ignored his presence and pulled him down, he always had a smile on his face and carried on. He taught me kindness – he is the most polite man you will ever meet. I am not a religious human, but I know my service to god is serving Pranav”.