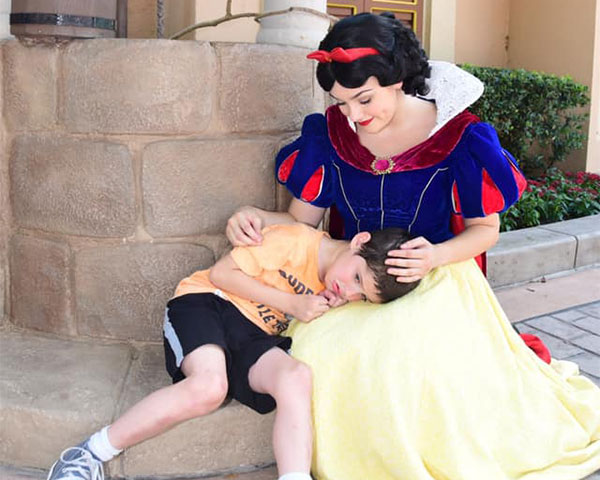 Recently, six year Brody who has autism, was visiting the famous Disney adventure park in California when he had a meltdown due to the loud noises and sound. While waiting at the line, Brody was approached and comforted by Disney princess Snow White. The girl, who was dressed as Snow White has been winning hearts across the world after Brody’s mother Lauren Bergner shared this on her Facebook.

To those who have not missed the Walt Disney epic tales, each story and its characters are etched in their minds forever. For many, even as adults, a visit to the world famous Disney Land is a dream come true. Those who have visited wouldn’t miss the ‘Disney magic thing’ at their adventure park in California. For six year old Brody who recently visited Disney Land, it was truly magical. Brody, who has autism, had a meltdown when he was at the park. It was Disney princess Snow White who came to his help by comforting the young boy. Images of Snow White soothing young Brody is now going viral on social media.

Brody’s mother Lauren Bergner, along with her husband and Brody were visiting the adventure park a few days back. Though Lauren has been preparing her son for a visit, Brody had a sudden meltdown due to the loud noises and sound. By the time there were near the line to meet Snow White, Brody was totally tired and exhausted. But just like the magical character in the Disney tale, Snow White reached out to Brody and was seen comforting him and spending time with him.

Snow White was amazing with him!! She kissed, hugged and cuddled him. He was laying his head crying on her lap. She then took him for a walk away from the crowd! She was amazing. She held his hand, danced with him, took him over to a bench and sat with him. She went above and beyond! She took so much time with him .She was a pure angel! She was magical and my family is forever thankful and touched!-Lauren Bergner, Brody’s mother.

The post got thousands of shares and likes. People from across the globe shared the heart-warming image. In the photos, Brody can be seen feeling comfortable and better in the company of Snow White. lying down on her lap and walking around with her later on.

The girl who appeared as Snow White has definitely some skills to handle young children. Her immediate bond with Brody shows how gentle and kind she was with the boy who is under the autism spectrum disorder. She truly sets an example to how kindness and gentleness can move people and make the world a better place.

Subhashini Rao, Founder of Sankalp Special School in Chennai had recently visited the United States of America (USA). She says that people are more aware of disabilities and knows how to handle young children better.

“The number of children with developmental disabilities like autism are much higher in the USA. Hence, people are more aware about disabilities and they do not judge the child or parents. Moreover, they do not look down on them like how we often see in India. In fact, people take all this with a pinch of salt. Hence gestures like what was shown at Brody would be quite common there. It is high time that such adventure parks become more inclusive, even in India. Every person must be treated equally”, says Rao.

Many people took to social media to share this heart-warming story.

“Stories like this make me love my company even more”, tweeted Jeffry R Epstein, who works with The Walt Disney.

“Having a family member with autism, being an educator with for SWVA, & having been a former @WaltDisneyWorld castmember this warms my heart! To the family- we see you. To Snow White – We THANK YOU”, tweeted Alex Soto.

ALSO READ: Gesture of comfort towards child with autism on first day of school goes viral around the world