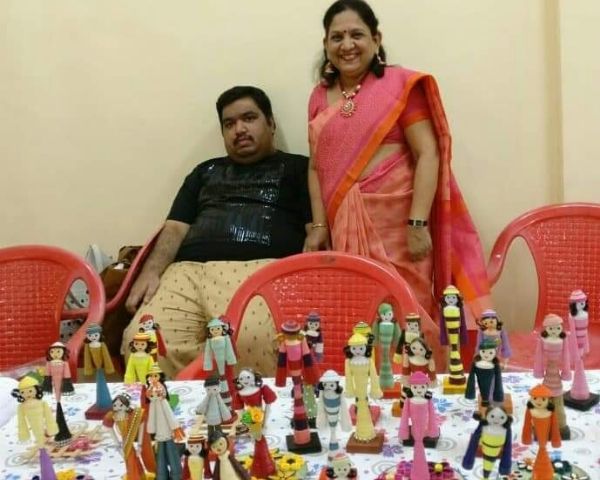 Soham Silam is an artist who makes paper dolls that are eco-friendly. His Facebook page ‘Sohams Dollhouse’ is a hit on social media. This 23-year-old has already made hundreds of dolls till date. His mother Manisha Silam is his biggest pillar of strength. Together, they are reaching out for the stars.

23 year old Soham Silam is a passionate artist. Take one look at his paper dolls, and you wouldn’t disagree! This youngster is busy making eco-friendly paper dolls and selling them to his customers in India and abroad. His Facebook page ‘Sohams Dollhouse’ is a hit on social media platforms like Facebook. His mother Manisha Silam always ensures that her son gets nothing lesser than the best. Read on to know more about Soham’s empowering journey.

Autism diagnoses at a young age

Soham lives with his family in Thane. He was in class 10 and had finished two of his board exam papers when the COVID-19 spread across the nation. His exams were postponed. So now, this youngster has his hands full of activities, especially making dolls.

Soham was diagnosed with autism when he was four years old. Manisha says that her son had perfect developmental milestones, but his speech and communication was affected.

We used to send him to a nearby nursery school. But he was always hyperactive we started getting numerous complaints about him. His academics was also affected. We took him to a psychologist who diagnosed him with autism. We were living close to a metropolitan city like Mumbai. Even then, neither we nor the doctor had any awareness about the disability- Manisha Silam, Soham’s mother.

He was later put into a special school where Soham pursued his studies.

From a very young age, Soham was interested in mathematics. Manisha says that he used to write numbers and alphabets reverse. He even predicted days and dates of every year perfectly. “He has completed the entire calendar of 2066. Soham can also write tables till 500. He is extremely talented”, says Manisha.

Soham’s tryst with art began at a young age. He loved paper quilling craft and used to do it regularly. Once when Manisha’s ‘jhumkas’ were damaged, Soham made them for her using paper. That is when Manisha realized that her son had hidden artistic talents in him. It did not take her long to help him bring out his skills.

They watched YouTube videos on how to make paper dolls. Together, they started the Facebook page ‘Sohams Dollhouse’ as well which became an instant hit. The page that was started three years back has fans and followers from across the globe, just like Soham’s dolls. “People from different parts of the globe place orders for Soham’s dolls. They are cute and eco-friendly. Some people even love decorating it above cakes etc.”, says Manisha.

Soham also makes specialized cakes for corporate companies and other parties. From doctors, dentists to advocates, his clientele list is long.

Manisha is also active in parent support groups. She is also the founder of Rajhanse Foundation that empowers parents of children with autism. The group has over 1000 members from across India. Their many vocational training and programs reach out to children with disabilities.

You can check out Soham’s dolls on his Facebook page – https://www.facebook.com/sohamsilam/