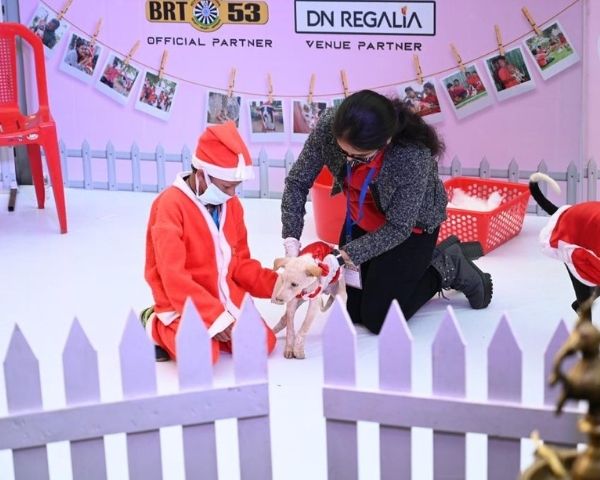 Speak for Animals, an animals rights NGO based in Bhubaneshwar held a three-day adoption campaign for animals who have been victims of cruelty or injured in road accidents. Lending their voice to this campaign were group of children with disabilities who urge the public to come forward and give these animals a home.

Abandoned animals struggle to find a home. Those with injuries or disabilities even more so. Their plight was highlighted in a three-day campaign called Sahyog organised by Speak for Animals.

Speak for Animals is a Bhubaneshwar-based organisation that is closely involved in animals rights issues, and part of their mission is finding a home for animals in distress. Volunteering for the campaign were a group of children with disabilities, who interacted with the public, urging them to adopt these animals.

We have been involved in animal rescue work for six years and have raised many animals with disabilities. Some are accident victims while some are born with disabilities. We did many campaigns and found that people don’t really empathise with their condition. – Kushal Biswas, Chairperson, Speak for Animals

The connect, however, was immediate for a group of children with disabilities at a home managed by Kushal’s friend Chinmay Pradhan, who is the founder of Chocolate Group, a social group for children. That was the trigger for the campaign. “There was an emotional connect and that led us to think of getting the children together with the animals in a larger campaign”, explains Kunal. “We found a shared empathy and thought why not get them together”.

The campaign highlighted the plight of not just dogs and cats but also cows. The children involved in the campaign were of different disability types .

“I thought I am the only one who can cross the road really fast on one leg”, exclaims Samina Begaum, a 13-year-old with a locomotor disability. “But for the first time I met a dog with one leg who was just as fast”.

The campaign attracted quite a crowd and the organisers plan to make this a regular feature.

“People loved the campaign and we believe this will help build empathy and compassion in the public”, says Chinmay,.

Romeo Pradhan, a 13-year-old with cerebral palsy, was among the ambassadors of the cause. “Animals with disabilities are cute too and need support. We need to help them and love them”.