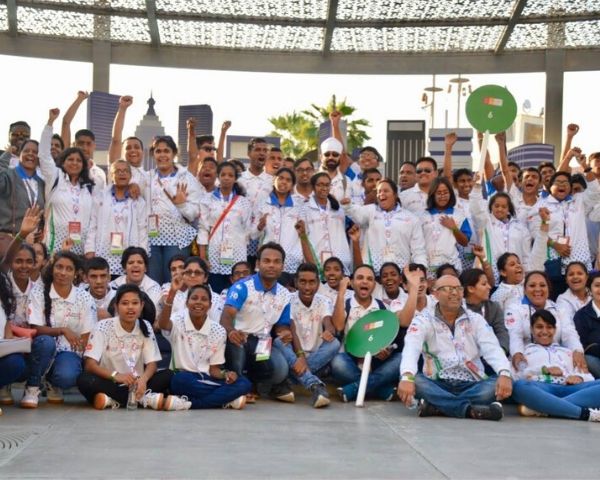 Special Olympics Bharat, an NGO working towards creating an inclusive world, has a Young Athletes Program that is focusing on children with intellectual disabilities. The Special Olympics Bharat is a national sports federation and is a stakeholder in upholding the rights of children with intellectual disabilities. That’s our focus on #StoryOfTheWeek.

Pranavheer’s mother had no idea how to look after a child with Down syndrome. As he grew older, his aggressive behaviour was becoming a cause for concern. Life changed when he joined the St Joseph’s Convent, Jalandhar, Punjab in 2016-17.

An integrated school, St Joseph’s Convent is a part of the Special Olympics Bharat Young Athletes Program. Under the programme, drills are conducted every day. Pranavheer’s behaviour was hard to control initially. He would fling the sports equipment across and misuse it. Three months later, his behaviour has transformed.

“He is not only compliant but also tries to help his co-athletes”, says Rekha Kashyap, Pranavheer’s mentor. “Holding the ball, throwing, walking , jumping- all this and listening to instructions is a great achievement. Group sessions have improved his behaviour”

Sports a path to an inclusive world

A non-profit organisation, Special Olympics Bharat, the India Chapter of the Special Olympics Inc is working towards the goal of creating an inclusive world. A national sports federation, it serves as a stakeholder in upholding the rights of children with intellectual disabilities.

“We reach out to over a lakh persons with intellectual disabilities in a year”, says Air Marshal Denzil Keelor, Founder Trustee and CEO of Special Olympics Bharat. “So far we have over 1.5 million athletes registered with SO Bharat. But still there are so many more to cover”.

The Young Athletes brings the power of Special Olympics into the early childhood development stage, bringing with it the potential to make a meaningful impact on the social, cognitive, psychological and physical development of children with intellectual disabilities. This makes a positive impact on the children, and also families, caregivers, teachers, coaches, volunteers and communities. “We create a more accepting and inclusive world for children with intellectual disabilities”, says Air Marshal Keelor.

In November 2016, the IKEA Foundation entered into a collaboration with Special Olympics Inc to fund this programme as part of the ‘Let’s Play for Change’ Campaign. It provided a three year grant to Special Olympics Bharat in 2017. Within the first year of receiving the grant, the programme reached out to over one lakh children in 154 districts.

Special Olympics envisions a world in which all people are valued for their unique contributions to their community and are respected, included and welcomed in society regardless of their different abilities. My vision is to take all the children with Intellectual Disabilities in India, within the Special Olympics umbrella. The attitude of people must change. Special Athletes should be accepted for what they are and not for what they ‘should be’. – Air Marshal Keelor, Founder Trustee and CEO of Special Olympics Bharat

Among the beneficiaries is Sahil Singh from Lucknow. He is a member of the National Athlete Input Council and National Youth Council. “We do require support and guidance for our health, job and money management, but we want you to have faith in us and involve us meaningfully. IT MAINTAINS OUR DIGNITY”, says Sahil. His mother Dr Bhawna Singh adds, “Special Olympics is a fantastic platform for children to develop confidence, courage and self-esteem in addition to physical fitness”.

The programme is now part of the curriculum of many mainstream schools. The eventual goal is to reach out to each and every school and community.