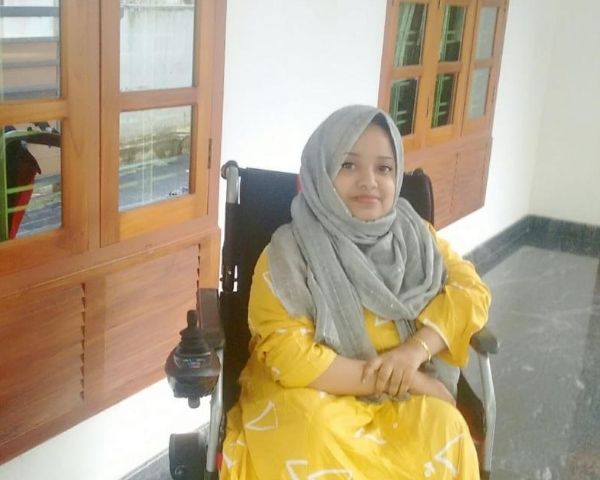 In the final feature of our month-long campaign #RaiseAwarenessAboutSMA, today we have 38-year-old Shibina PA from Ernakulam district in Kerala. Shibina, who makes a living by creating beautiful craftworks, hopes to see a world which is accessible and disabled friendly. Diagnosed with Spinal Muscular Atrophy (SMA) very early, Shibina also wants to help create more awareness about her disability in the society.

As members from the Spinal Muscular Atrophy (SMA) community works on creating awareness about the disability, especially throughout the month of August, there calls for a need to sensitize the society about SMA. This disability that causes weakening of muscles, can affect the life of the affected person in many ways. Kerala-based youngster Shibina PA, 38 years old, hope to see a sea of change and a positive outlook towards SMA in the future.

A wheelchair user, Shibina recollects that her family was aware about SMA because she had an elder brother diagnosed with same disability. But he passed away at the age of two. So when Shibina started showing symptoms of SMA as a baby, her parents immediately consulted her to a doctor. That is how she was diagnosed at the age of one.

“Unlike my brother who passed away, I could sit properly. But I showed all other symptoms and my parents did not want to take a chance. When I was diagnosed, it was disheartening for them. But they left no stone unturned to help me out during my growing up years. They were hopeful for the best and provided me with treatment without fail”, she says.

Shibina currently lives with her parents, brother and his family, all of whom are supportive of Shibina’s ventures.

Disability no barrier to being empowered

Though Shibina completed class 10, she has not set foot into a school premises and does not miss it either. “With my condition, I’am glad that I could be home-schooled. I would rather count my blessings than cry over what I could not do. I was unable to attend school, but I could complete till class 10 at least”, she says.

So with whatever knowledge she has about academics, Shibina used to teach students near her home. But she had to quit that last year due to health issues. Shibina currently reads books and make audio recordings for visually impaired people.

During her free time, Shibina also makes beautiful handmade bangles, paper flower vase and other ornaments that are eco-friendly. She sells them to interested people, mostly her own relatives and friends. “I can say that one of my biggest assets are a group of great friends whom I know will always be there for me”, she says.

NGO MIND and Prajaahita together are holding a ‘Spinal Muscular Atrophy Awareness Month Campaign’ in which Shibina is also a part of. Through the campaign, Shibina hopes to help create awareness about SMA and most importantly, help create accessible public spaces.

In India, thousands of people like Shibina hope to see an accessible and disabled-friendly world around them. Their constant demands to government and officials often goes unheard. SMA community members believe that creating awareness about their disability is the first step towards creating an inclusive society.