Story of this young amputee & her journey as a new mother is winning hearts on social media! 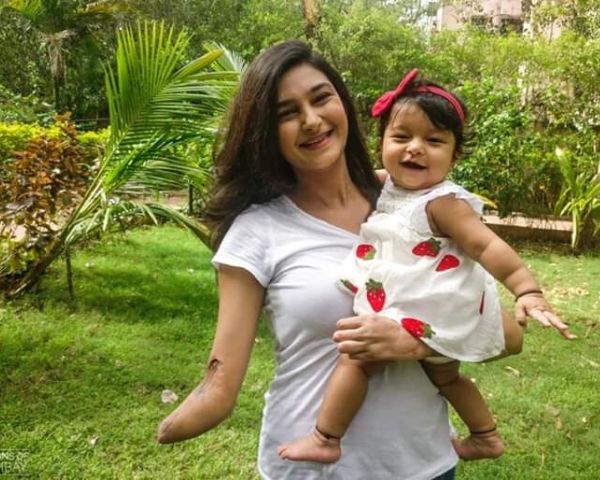 The story of a young mother who is an amputee is winning hearts on social media. Her journey towards motherhood and struggles as a new mother was shared on popular Facebook page, ‘Humans of Bombay’ and has got over 18,000 likes and more than 500 shares. Read on to know more.

Some stories about people with a disability are not just inspiring and moving, but heart-warming too. Recently, a story that appeared on the popular Facebook page ‘Humans of Bombay’ was such of a kind. It was about a young mother who is an amputee. She talks about her struggles of being a new mother, but how all the hardships is taken over by love for her daughter. Though her name is not given in the story, her life and journey towards motherhood has been beautifully shared.

Natasha* (name has been changed) was 12 years old when she got electrocuted while playing. Her right arm had to be amputated and she underwent 40 surgeries for both her arms. It affected her life in many ways- right from writing, wearing uniform or just walking outside because no outing was complete without people staring at her.

Gradually, she started doing things on her own and became more confident about her arm too. At the age of 25, Natasha got married to her college sweetheart who saw her beyond a disability.

Five years later, she had her baby Meher. “It was the happiest day of my life. But over the next 3 months, my life changed completely”, she says.

We all know about the many struggles that new mothers face. Right from a change in their routines to depression, the hardships are real. For Natasha too, it was the same. But a disability added to her woes.

“I could barely hold Meher. Someone always had to hand her to me. I couldn’t change her diaper, and I wasn’t even producing enough milk to feed her. I felt like a bad mother; I failed to do the most basic things for my baby. Even my body changed. I had saggy breasts, a belly bulge and gained 10 kgs. I felt ugly and irritable”, she says.

Natasha stayed up long nights, had meltdowns and would snap easily at her husband and mother too. She often told them that they did not understand what she was going through. She knew life was never going to be the same again.

All the while, this young mother knew that she was experiencing postpartum depression, even though she wasn’t diagnosed with it.

But there was a ray of hope. Things started getting better 2 months later. Meher grew bigger, so Natasha felt more confident holding her. She even started trying to change her diaper. To cope with the stress, she started watching new shows and went on drives with husband and friends in the evenings after Meher slept.

Natasha is still not 100 percent able to care for Meher like from bathing her to changing her diapers.

It has been seven months since Meher arrived to Natasha’s life.

“I still get mood swings, but Meher’s coos and grunts lift my spirits–she’s always smiling! I’m looking for the small wins, the little things to look forward to–like right now, my husband and I are planning a holiday with Meher hopefully next year. I can’t wait for sunny beach days with our baby–the first as a family!
Motherhood is beautiful, no doubt, but it isn’t always rosy. Our bodies change; our lives change. But the one thing that remains constant is the love–and that always pulls us through”.

The story of Meher and her mother has won hearts. It was widely shared and many others made sure to share their love for the mother-daughter duo.

“What makes you the best mother is the fact that you accept your imperfections and make your own version of perfection out of the situation. You’re special and your daughter would forever be grateful to have been raised by a mother/warrior. Bless you”, says Utsav Maity.

“You are a warrior mom to an adorable baby with a sweetheart of a husband who is no less than an angel in disguise. Guys like him rarely exist. So make peace with yourself dear and do the best u can for ur kid without beating yourself up. More power to u sweetheart. You are an inspiration for many “, says Chitra Arora.