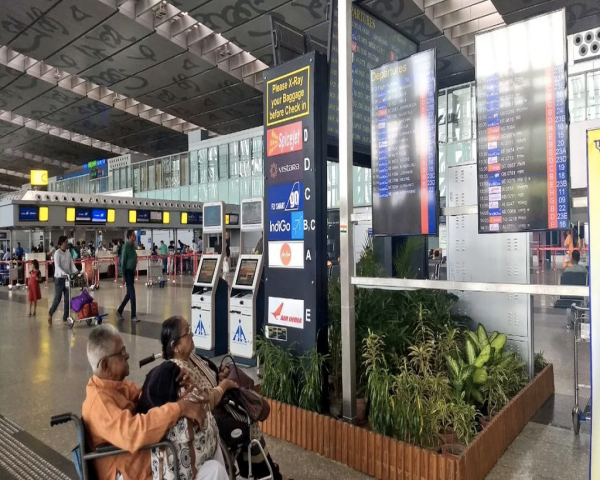 Kolkata Airport was in the news a few weeks ago after a group of disability rights activists reported that they were harassed and discriminated against by airport officials. Airport authorities had promised greater sensitisation after those allegations and they are going all out to become accessible.

Wheelchair-friendly help desks, disabled-friendly toilets and retiring rooms, low height flight information displays and tactile studs at departure level. In case you thought you were reading about an airport in the United States or Europe, read on.

These are just some of the accessibility features at the Kolkata Airport that were recently unveiled. Stung by allegations of being insensitive and abusive towards passengers with disabilities, Kolkata airport authorities are going out of their way to correct that perception.

The allegations were levelled by a group of leading disability rights activists from the city who were on their way to a conference in New Delhi when they are subjected to harassment by a Central Industrial Security Force (CISF) official as well as airline employees. Airport officials promised to look into the matter and among the many assurances was sensitisation trainings for airport staff members.

The slew of disabled-friendly amenities, announced on social media accompanied with images of the makeover less than a month after that incident is certainly commendable.

Speaking to the media, Kaushik Bhattacharjee, Director, Kolkata Airport said that the process of identifying the shortfalls in infrastructure at the airport had begun in August this year. “We have started the process of upgrading the facilities to provide barrier-free access to passengers with reduced mobility. Our motto is to ensure that every passenger gets to negotiate through the airport without seeking assistance”, said Bhattacharjee to the Times of India

The upgrades are a part of the Accessible India Campaign. In the pipeline is a dedicated car parking facility for people with disabilities that is located close to the terminal. Airport officials are also being given separate sensitisation trainings on communicating with passengers who are deaf and hard of hearing. There will also be sensitisation trainings held to understand the needs of passengers with other disabilities.

All airlines have been asked to provide boarding ramps like IndiGo or make an ambulift available. The first phase of the makeover is complete.

“When disabilities are taken into consideration, the needs of people with physical disabilities is taken into consideration. As someone who works with children with autism and developmental differences and a parent to a child with autism, I hope their specific needs are also considered. Like at airports, my son has to stand in a separate queue from me and I can see the anxiety building up within him”.

Another measure Aditi hopes to see are sensory waiting rooms which have been introduced in some airports in India. “It just needs to be a room with bean bags so cushions so they can wait in case flights are delayed”. Standardised protocols would also help, like indicators for male and female washrooms. “In some airports there are images of a king or a queen to indicate washrooms for men and women, instead there should be one image used everywhere”.