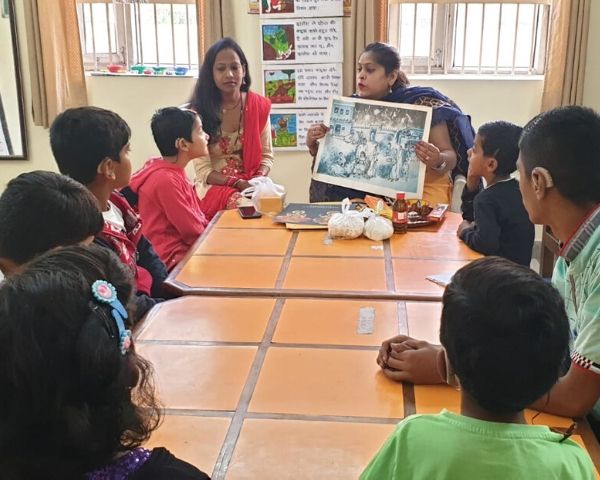 For 25 years now the Suniye Support School for Hearing Impaired Children has empowered and enriched the lives of many deaf and hard of hearing children and their families.

A graduate of Delhi University, 23-year-old Tushar Aggarwal wants to make a career in the government service and is preparing for his exams. His proud father Deepak Aggarwal cannot believe how far he has come. Born with a hearing disability, Tushar could not communicate until he was nearly three years old. “Until he was 2.5 years old, Tushar was totally unable to speak and listen. I can’t describe how I felt at the time”.

“When my son started going to Suniye he learned a lot and started becoming more capable”, says Deepak. “He is now able to speak and listen with the help of hearing aids. Earlier people could not understand what he was saying but over time thanks to speech and language therapies that has changed. He is no longer afraid that people cannot understand him. He is now a confident, mature and independent person”.

It is countless stories like these that Suniye can feel justifiably satisfied and proud of as it marks 25 years of its launch this year.

Started by a small group of parents

The school started off at the YMCA, New Delhi with the support of trained teachers. After working out of several temporary premises, the Ministry of Urban Development allocated some land and in 2002, the school had a permanent centre.

Till date, we are one of the very few institutes in India teaching spoken language to hearing impaired children. We have always maintained a zero-discrimination policy and all admission is done regardless of caste or creed. All our services to the children – most of whom come from low income families – are free except for a nominal yearly membership fee. Over the last 25 years, we have been able to help over a thousand children who are doing well in life. – S Ramakrishnan, Convenor & Secretary,Suniye Support School for Hearing Impaired Children Team The transformation this has brought about in the lives of many families is best told in their words. Five-year-old Aditi Paul, who joined Suniye in 2017, is all set to take admission in a mainstream school. “We are thankful to Suniye for making our life as normal as that of other parents of non-disabled children”, says her mother Jharna Paul.

Afrah Azam’s father says his daughter has grown in confidence after joining Suniye. “Her speech and language have developed to such an extent that she is now able to take admission in a mainstream school. Her level of speech and hearing is good because of Suniye’s guidelines, and the hard work put in by us and her teachers. She is now seen as ready to join class 1”.

Prateek Asnani, who works as an auditor in the Ministry of Defence, Government of India, says the guidance he and his parents received at Suniye enabled him to do a degree in mechanical engineering. “My parents joined the school in 1995 when I was just three years old. They received training materials and tips from various experts in Suniye on how to teach me to speak. I became a confident, self-assured individual who went to mainstream schools and developed a professional career”.

The team at Suniye has gone beyond the school to change lives elsewhere. Thanks to their dedicated campaign, a 3% reservation for people with disabilities in Delhi University and GGS Indraprastha University came into effect. It also led the Indian government to recognise 60 decibel hearing loss as the benchmark for identification of hearing loss as well as the CBSE to allow deaf and hard of hearing children to be exempted from learning a second language, among others.