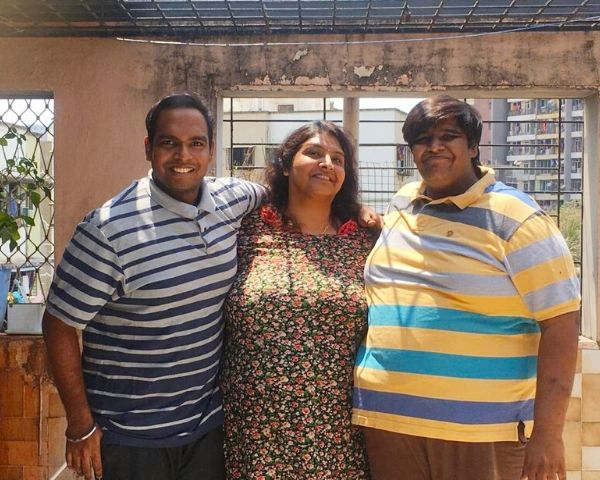 In our series #SupportAutismAwareness, today we feature Sunita Sharma and her two sons Satyam Sharma and Shivam Sharma. Satyam and Shivam are twins who were diagnosed with autism when they were around four years old. But as a parent, Sunita has stood by her sons to empower them. Satyam who is an ardent chef, bakes cookies and cakes at home. Shivam is a fashion photographer and sports enthusiast too.

When Satyam and Shivam were born, Sunita Sharma and her husband Manoj Sharma were excited to raise twins. But less did they know that the journey ahead is going to be a bumpy one. Satyam and Shivam, who are 23 years old now, was diagnosed with autism when they were around four years old. Sunita did not let that hold back her sons from following their dreams. She believes that letting your children follow their hearts is the ideal thing to do as parents.

Sunita, Manoj, Satyam and Shivam were earlier living with their close relatives in a joint family. As Sunita put is, that has its pros and cons to it. Though the children were showered with love, care and attention equally from all the family members, behavioral issues were a challenge. Now, they moved to their own home in Mumbai.

Not everyone in your own family would be able to understand and accept your children who has behavioral issues. I had to regularly take them for therapies too. So managing that and staying in a joint family was not easy for me. Even today I believe that if my sons grew up in a nuclear family along with me and my husband, things could have been better. I would have been able to concentrate more on them- Sunita Sharma.

Moreover, the societal stigma about autism only made things worse for Sunita and Manoj. “During those years, people had no awareness about autism. Everyone says a person with autism is mad. Now things are changing for the better. Society is understanding that people with autism can lead a normal life”, says Sunita.

The empowering journey of Satyam and Shivam

Both Satyam and Shivam were born as premature babies. Hence, they had their own health challenges too. Sunita says that their autism diagnoses happened late because the family did not have any awareness about disabilities. Except for certain behavioral issues, Satyam and Shivam had perfect developmental milestones as well. “Initially we thought that they were deaf because both my sons were not paying attention to what we said. We did tests for that too”, says Sunita.

Satyam is non-verbal but has excellent communication skills. He uses his own sign language to communicate with his close people. He has always been passionate about cooking and baking. So currently, he is running his own small kitchen at home where he bakes stuffs like cookies and cakes. They are sold out to interested people from outside. He had attended a special school till the age of 19.

Shivam who is verbal, completed his mass media studies. He started speaking at the age of five, so Sunita admitted him to a regular school where he did his education. Shivam has been a keen photography enthusiast since the past few years. He is into fashion photography and even has his own Instagram page with a lovely photo collection. Currently, he works as a freelance photographer.

Being part of ‘Kaun Banega Crorepati’ with Amitabh Bachchan

Sunita brims with excitement when she talks about attending the show along with her son Shivam. The show was aired last year in September.

Sunita had also carried cookies baked by Satyam. After a couple of weeks, Amitabh Bachchan called up Sunita to appreciate them and also asked for their home address. In a few days, they got a personalized note from the star appreciating her sons and the delicious cookies.

“That is one of the biggest appreciations that my sons have received. That too from a star like Amitabh Bachchan. It was a great honor”, she says.

Sunita is looking out to do part-time jobs so that she can spend more time with her children. “Until a few years back, I couldn’t imagine Satyam going to a store alone. He used to run off from home as a kid. But today, he goes to shop downstairs by himself and picks up everything on his own”, she says. Sunita further adds,
“Patience is the key to bringing up children who have disabilities. Parents must understand that you have no other option but to support them”.

Sunita’s biggest pillar of support is her husband Manoj. “I’am so proud of my wife for standing by our children always. She has undergone many struggles for that. She has always ensured to improve them in all possible ways”, he says.