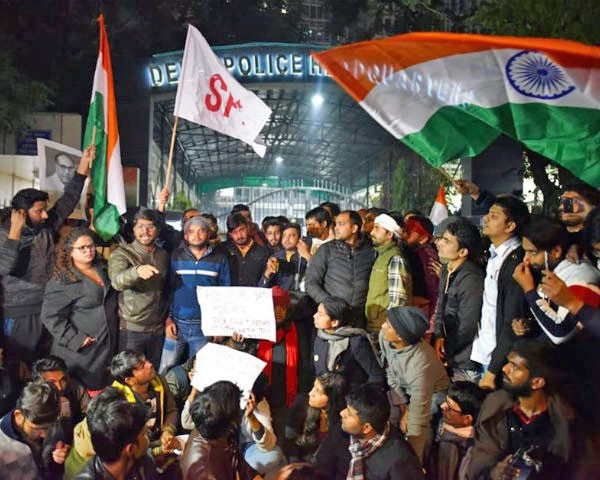 Many students were injured in the violence that broke out at the Jawaharlal Nehru University on Sunday evening. One of those hurt was Surya Prakash, a blind research student at the university. Surya says that despite his disability masked goons attacked him severely. Disability rights activists across India are gearing up to protest against this injustice. They have expressed concerns about the safety of disabled students.

Among the casualties in the violence that broke out at the Jawaharlal Nehru University (JNU) was Surya Prakash, a blind research scholar. Surya lives at the Sabarmati hostel inside the JNU campus. This is one of the main areas targeted by masked goons who entered the campus on Sunday night.

How the attack on the blind JNU student unfolded

Surya, who is from Deoria, Uttar Pradesh, has completed his MA and is doing his course work in preparation for an MPhil. In an interview to Livemint, he recounted the horrifying experience.

“Around 6.50pm I was sitting in my room studying, and I could hear people outside yelling the filthiest abuses. I could hear them attack the room in front of mine and then they stormed into my room. They broke down my door, and started thrashing me with rods on my back and arms. They were reeking of alcohol and I kept screaming, ‘’I’m blind, please spare me!’”. The mob did not spare him and kept beating Surya. The ordeal finally ended when one person in the group told the others that he was actually blind.

Prakash was rushed to the AIIMS trauma centre by some students, where he was given treatment. Surya, a graduate from St. Stephens College, says he has been getting calls warning him not to speak about the incident. He is frightened and wants to lave. “I just want to leave from here so that I can feel safe. I hope the administration will help us.”

Disability groups gear up to protest attack on blind student

The incident has sparked outrage amongst the disability community across India. This is not an isolated incident. In November 2019, another blind student Shashi Bhushan Samad, a student union councillor, was beaten up by police during protests. Shashi’s condition was critical.

TMN Deepak, Founder, 3 December Movement in Chennai participated in a candle light vigil held to protest against the violence in JNU.

We have geographical limitations in reaching out to the victim but are in solidarity with JNU students.We are also going to ensure that the matter reaches the Human Rights Department. It is disheartening that in spite of the Rights of Persons with Disabilities Act, 2016, no action is being taken against those who violate the law. What happened to Surya Prakash is not an isolated incident. Since the CAA protests started, many disabled people have been victimised. – TMN Deepak, Founder, 3 December Movement

Maitreya Shah, a law student and disability rights activist, in Ahmedabad, is also concerned about disabled students being targeted in the violence. “I am shocked because I too am part of an educational institution. Such mob violence and targeting of students is not acceptable. A disabled student is being beaten up and their security is compromised”, says Maitreya, who is blind. “In such circumstances, disabled students are worst affected because they cannot even run for their lives. This issue has to be talked about. If this happens in colleges, parents are going to stop sending their children to campuses.”

Maitreya plans to take the safety of disabled students up. While there is heavy security now across JNU campus, students and teachers are clearly feeling vulnerable.