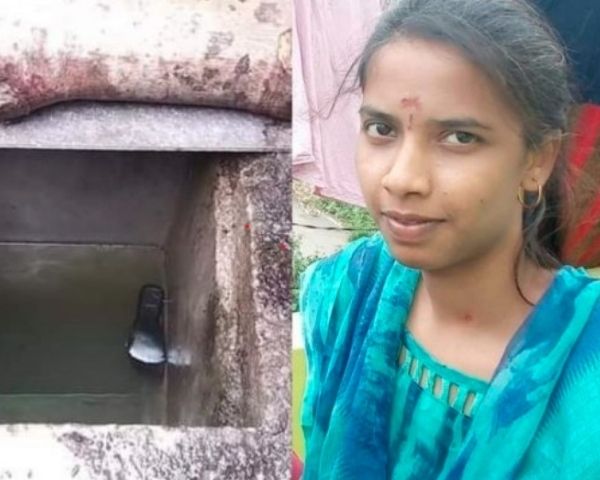 Saranya, a girl with disability who worked in the agricultural office at Kancheepuram, Tamil Nadu recently met with a tragic death. She died after falling into a septic tank near her office which did not have basic amenities, even a toilet. Disability rights activists are demanding answers from the government and speedy action so that such unfortunate incidents do not happen in the future.

24-year-old Saranya from Kancheepuram in Tamil Nadu had big dreams and ambitions for her future. Someone with physical limitations, Saranya still managed to secure a job with the state agricultural sector. But her dreams were cut short. Saranya met with a tragic death last Saturday when she fell into a septic tank near her office. Saranya, who had to attend nature’s call was forced to go near the septic tank since her office did not have a bathroom for its staffs. The incident has sent shock waves across Tamil Nadu with disability rights activists demanding answers from officials who have always turned their heads towards needs and requirements of the community.

Kancheepuram government agricultural office is built with no basic facilities. Neither do they have ramps, but also lack basic amenities like bathrooms inside the office premises. Staffs are forced to go to nearby homes to attend nature’s call.

Saranya worked as a ‘Godown Manager’ at the agriculture extension center at Kalakattur in Kancheepuram. On the fateful day, Saranya informed her colleagues that she is going to use a bathroom at a nearby house. But in spite of her not returning after long, her colleagues started searching for her. They found her slippers floating on the septic tank. Saranya was rescued by fire personals from the 10 feet deep tank. But she was declared dead upon arrival at the hospital.

Saranya who could walk on her own, but with a limp is likely to have decided to use the septic tank instead of going to a nearby house. Police say that the accident would have happened after Saranya stepped on the tank due to which its lid broke causing her to fall right into it.

A case was registered at the Magaral police station. Her upset relatives and family members protested near Kancheepuram government hospital.

Though district collector Maheswari has ordered for a probe into the incident, disability rights activist seek quicker actions and more facilities for disabled people in government offices which is need of the hour.

Talking to Newz Hook, Gagandeep Singh Bedi, Agricultural Production Commissioner and Principal Secretary to Government said, “The incident is unfortunate and we have asked the district collector for a report. The government has ensured to introduce facilities for people, but I understand that where the incident happened, both building and the complex was an old one. But that is clearly not an excuse”.

TMN Deepak, founder, 3 December Movement says, “We need to look into the disability aspect and how well central government schemes are rightly implemented. Laws for accessibility for the disabled were introduced for the first time 25 years back. Then came the RPWD act, 2016. Even Tamil Nadu government has exclusive laws for disabled people, but why aren’t they implemented in the state? Now a young girl has lost her life”.

S Namburajan is the General Secretary of Tamil Nadu Association for the Rights of All Types of Differently Abled and Caregivers (TARATDAC). He says that a compensation of Rs 1 crore and government job for Saranya’s sister is demanded. Reportedly, state disability commissioner and human rights commission have also taken up cases. But Namburajan’s organization demands response from head of the state, Chief Minister Edappadi K Palaniswami.

“Our CM posts on social media about how he was instrumental in donating four wheelchairs and how he gave job to a disabled woman in a few hours. Why isn’t he responding to the unfortunate incident that happened to Saranya? All those who visit the agricultural office, including farmers, are forced to go outdoors to attend nature’s call. We have schemes like ‘Swachh Bharat’ which is never implemented. I don’t expect any positive results to be yielded even after this tragic incident”, he says.