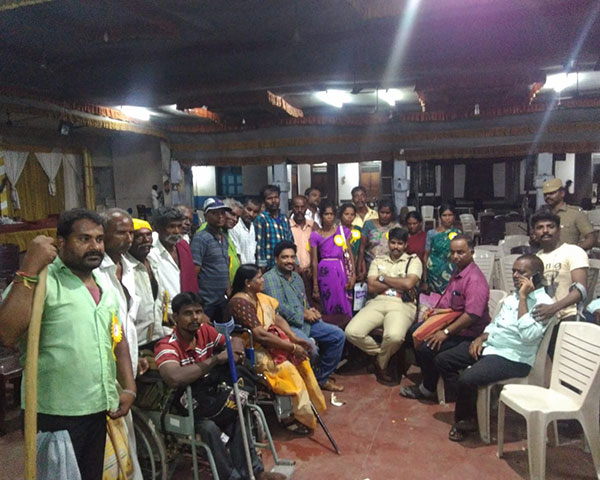 Last Thursday, over 1800 people with disabilities from across Tamil Nadu gathered together to in front of the state Secretariat to protest against government apathy and non-implementation of RPWD Act, 2016 till date. Though the protestors were arrested and detained, they were later allowed to meet the state secretary who assured that they will get justice at the earliest.

The implementation of Rights of Persons with Disabilities Act, 2016 (RPWD) still remains a distant reality in many states across India. Last Thursday, more than 1800 people with disabilities from across Tamil Nadu gathered at Chennai near the Secretariat to protest against the apathy of the state government to rightly implement laws or promote inclusion. In spite of being a peaceful protest, both organisers and protestors were arrested by the police and detained at a nearby marriage hall. This incident had sparked outrage amongst the community members.

The protest was jointly organised by December 3 Movement, Tamil Nadu Association for the Rights of All Types of Differently-Abled (TARATDAC), National Federation of the Blind and Tamil Nadu State Federation of the Deaf. All the organisations pointed out that the Disability Commissioner of the differently-abled welfare department B Maheswari or the concerned departments are unable to work for the welfare of people with disabilities in the state. This inefficiency to provide education or employment is affecting community members in many ways.

Last year, people with disabilities had come together to protest against the inefficiency of government in implementing the act. Protestors met with state ministers who promised swift action and formation of rules in the state. Later, the central government asked them to nominate an independent commission.

TMN Deepak, founder of December 3 Movement, was leading the protest. He says that unless people with disabilities get their rights, the protsts are going to continue.

The current disability commissioner is doing more of clerical work when they have the power to implement all the rights. In fact, Rs 30 crore has been spent by the government for non-implementation of our rights. State funds for people with disabilities still remain unused. Officials must be working together to provide education and employment opportunities. Nothing substantial has been done till date. Our protest was against this government apathy-TMN Deepak, Founder, December 3 Movement.

Till date, most of the welfare schemes promised by state government remains shelved. The 5000 wheelchairs promised by Chief Minister Edappadi K Palaniswami has not yet been provided. In spite of the many laws to protect them, people with disabilities are discriminated and harassed. Education and employment still remains a distant reality to many.

Even though the protestors were arrested and detained, the police allowed representatives from each organisation to meet the state secretary K Shanmugam since Chief Minister was out of town. “They said that they would take strict against, but we were not ready to buy that argument. They just wanted us to disperse. We were adamant on fighting for our rights. Soon, the state secretary assured that he would look into the matter soon after the Chief Minister is back in town on 10 September. In fact, he was alarmed at the inefficiency of the department and officials in handling our problems”, says Deepak.

The State Human Rights Commission (SHRC) has also asked the state government on why the RPWD Act, 2016 has not yet been implemented yet. This is indeed a clear case of violation of human rights. A detailed report has been sought from state officials, especially the Disability Commissioner.

“We want strict action to be taken against government officials who are in department of people with disabilities because they are not doing anything for our welfare. Also, we want strict implementation of the RPWD Act, 2016 without any delay”, says Nanbu Rajan, General Secretary, TARATDAC.