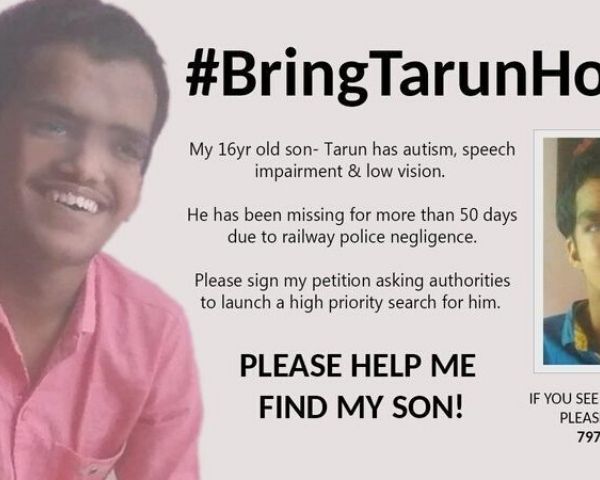 17-year-old Tarun Gupta, who has multiple disabilities has been missing since the last six months from his home at Colaba in Mumbai. His parents and officials have been unable to trace him till now. Tarun’s family is now worried about whether he may have contracted COVID-19. This is our #StoryOfTheWeek

Since last October, Vinod Gupta has been searching relentlessly for his 17 year old son Tarun Gupta. Tarun, who was diagnosed with autism, has low speech and vision impairments and is hard of hearing too. This youngster went missing last October from Mumbai. It has been over six months now. The family or police has been unable to trace him causing worry to Tarun’s parents. Recently, in an appeal made on social media, Tarun’s mother says that they worry if he has contracted COVID-19.

The fateful incident happened on 1 October. Tarun was standing outside his house at Colaba when a procession passed by. Tarun, who loves dance and music, joined the procession which ended at Fort area. Clearly, the young boy could not trace his way back home and got lost.

In CCTV visuals from Panvel railway station, Tarun could be seen seeking help from a CRPF railway official the next day he went missing. But the cop unfortunately put him into a Konkan bound train. Later, Tarun was spotted at various railway stations across North India. But by the time the family arrives, he goes missing.

Vinod Gupta, who spoke to NewzHook in October said, “Tarun can be seen crying and asking for help in the video. If the official was sensitive and sensible, Tarun would have been back home by now. It was his duty to wisely handle a situation like that, especially when he knew that Tarun had a disability. Currently, we have not filed a case against the official because we are looking out for Tarun”.

The family is not leaving any stone unturned to ensure that he reaches back home safe.

Many efforts to find Tarun

The family started a petition #FindTarunGupta asking Prime Minister of India Narendra Modi and other concerned officials to wake up to the plight of the family.

Vinod Gupta claims that he has already lost over Rs 15 lakhs trying to find his missing son. He reportedly even hired a detective, an expert in finding missing people, to find Tarun. Over 14 workers were hired, and Vinod had to pay them Rs 1000 each day to look out for Tarun. All those efforts did not become effective. Moreover, the family has been visiting many railway stations. They took flights to different cities after receiving calls of spotting Tarun.

Many people even took to their social media to share Tarun’s photos and details. The information was widely shared.

Waiting for Tarun’s return back home

Vinod Gupta and his family are hoping for the best. Tarun’s mother recently took to social media to share a video of the family expressing their concern over Tarun contracting COVID-19. In the video, the shattered mother says how they are worried about their son going to find food and water during this lockdown period. If he is infected, he won’t be able to even tell anyone.

The family is sure that Tarun is somewhere waiting for help to return back home. But will it take many days more? Will they be able to re-unite with their son soon? The doting family is waiting.

Tarun’s missing raises safety and security concerns of youngsters with autism. Parents as well as experts from the field are shocked and aghast that Tarun has not yet received any help.

Archana Patil from Mumbaim parent of a youngster with autism has been in the forefront in the lookout for Tarun.

“As a team, we searched for him at many places. I personally distributed over 1000 pamphlets about Tarun’s missing. We tried our best. He was just like our own kid. I can imagine the trauma that the family must be going through. I believe the government has also done their bit to help the family. But there was some miscommunication. Moreover, Tarun’s old photo has been doing rounds on social media. No one is aware of how he looks now. There are many youngsters with intellectual disabilities who have been disowned by their families. What if they look like Tarun? People can mistake and ignore real Tarun in case they spot him somewhere”.

“Being parent of an autistic child, I can feel the pain and helplessness of the parents. He has multiple disabilities and is far from his parents, especially during these Coronavirus times. Government must take up the matter as top priority. I pray for the family”, says Pratibha Bhatnagar from Jaipur, who has a son with autism.

“I can well imagine what his parents are going through. I’am shocked that he couldn’t be traced till now. The Corona issue started only by mid-January. There was so much time to trace the child. I understand there were helplines. I’am sure authorities have also done their bit. But was that enough. Six months is a long time. Hope he is found soon”, says Anita Pradeep from Kochi, who has a son with autism.

“It is really disheartening to know that Tarun could not return back home in spite of sharing about him widely on social media by many people. I do not know who the authorities are behind working on the case. But the lockdown period would have been ideal and easy for officials to locate the boy. It is unfortunate that he has not been found yet. Hope he is safe”, says Seema Lal, Co-founder of TogetherWeCan, a parent support group from Kerala.