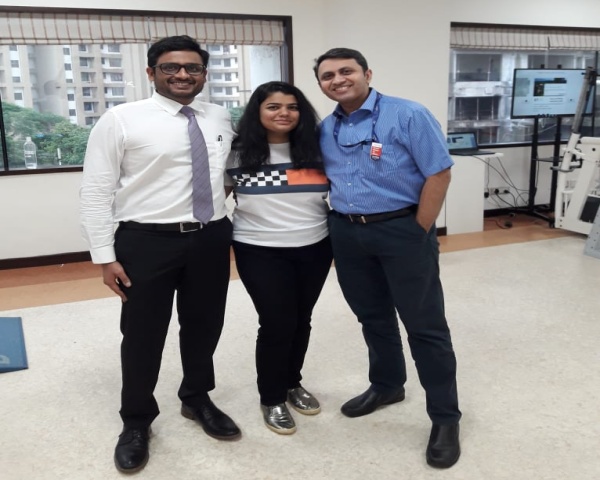 Less than six months after a young Mumbai girl was partially paralysed in a fall while playing, she is walking again with no help thanks to the right medical intervention at the right time. Doctors say this underlines the need to operate on patients within the right time frame so the injuries are not irreversible.

16-year-old Saloni Merchant was enjoying her vacations playing in her building garden when she accidentally fell from a wall, 15 feet high. When she said she couldn’t walk or feel any sensation in her legs, Saloni’s parents rushed her to a hospital near her home in Thane, near Mumbai.

“Doctors told us she had suffered a spinal cord injury (SCI), had multiple fractures and could not be healed”, recalls her father Suraj Merchant. “They said she would be paralysed for life”.

The diagnosis came as a total shock for the family. “I had been playing with her the whole day and she is our only daughter. I simply couldn’t understand what had happened”, says Suraj. Doctors told the Merchants Saloni’s case was ‘hopeless’. “No one would touch her”, he says.

The family had virtually given up until a conversation with a family friend led them to Dr Priyank Patel. A spine surgeon, Dr Patel did not believe that the situation was hopeless and asked the Merchants to shift Saloni to Jupiter Hospital, a prominent medical centre in Thane.

Dr Patel, who is also the honourary spine consultant for Nina Foundation, has been a part of the NGO trustee Dr S. Y Bhojraj‘s team.

The key to recovery immediate medical care. Saloni was paralysed because the spine was shattered, and the spinal cord was out of alignment. She was at a hospital where she was just lying around, and no treatment was being done. We operated on her and realigned the spinal cord stablising it with screws and a rod. We also removed broken bone pieces that were affecting the nerve to set it free. – Dr Priyank Patel, Consultant spine surgeon, Lilavati , Breach Candy and Jupiter Hospitals

This freed up the nerves and helped Saloni regain sensation. Next followed aggressive neuro-rehabilitation therapy.

“The body has to understand once again how to function”, says Dr Patel. The aim was not to make it functional but as close to normal as possible. For the first three months after surgery, Saloni was put through a range of therapies with devices like anti gravity treadmills. “This way the body weight is taken away, your weight is drastically reduced and your weak muscles kick in. Gradually muscles come back to normal”.

Saloni started showing visible improvement within days. In 10 days,, she was up on her feet with the aid of a walker and was discharged from hospital in four months. She has also regained urine and toilet control. Suraj cannot believe the amazing turnaround. “It is unbelievable when I I see her walking around today. Dr Priyank is God for me. I may have given birth to her, he has given her a second life”.

Saloni’s story, says Dr Priyank, shows the importance of operating on patients with such injuries immediately, something most families and even many in the medical fraternity are unaware of.

“This kind of approach, where multiple experts come together is seen in the West where patients with SCI are shifted to a trauma care centre”. In Saloni’s case, the combined efforts of spine surgeon, neurosurgeon, and urologist led to her recovery. “We have the same expertise as the West”, says Dr Patel, “but awareness is not there. Take Saloni’s case for instance. The Merchants are an educated family, but it took them two days to get to me”.

Saloni is now in junior college and back to her usual routine. Her story hope parents and doctors will serve as an example. “We want Saloni to be a mascot, an example of how if an injury is sustained, it is important to seek the right intervention at the right time, and not take a passive approach”, says Dr Patel.