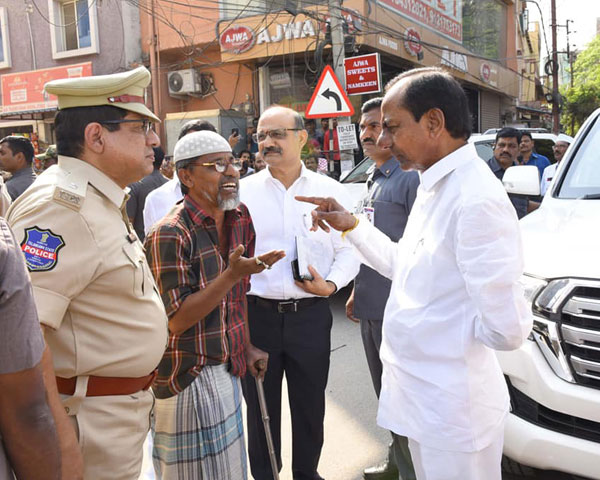 Telangana Chief Minister K Chandrasekhar Rao (KCR) recently reached out to a disabled and elderly man named Mohammad Salim last week at Hyderabad. Reportedly, the man was waiting to meet KCR on the road when the minister stopped his car and listened to Salim’s grievances before assuring all the help he needed. KCR’s gesture won him a lot of appreciation on social media.

Recently, Kerala Chief Minister Pinarayi Vijayan attended the house warming ceremony of a disabled man named Chandran at the state capital Thiruvananthapuram. Vijayan, who was accompanied by two other ministers, handed over gifts to Chandran and family. The photos shared by the minister on social media had won hearts of netizens. Now, Telangana Chief Minister K Chandrasekhar Rao has won a lot of praise for his kind gesture. Reportedly, the minister stopped his convoy to step out of his car and reach out to a disabled man who was waiting on the road for him. Rao, popularly known as KCR has received a lot of appreciation for his latest act.

The incident happened last week near Hyderabad. The minister was returning after a function from Toli Chowki. KCR spotted the disabled and elderly man waiting with a memorandum in his hand. He desperately wanted to meet the chief minister to share his grievances. Immediately, KCR asked his team to stop the car, stepped down and reached out to the man.

The man, identified as Mohammed Salim, worked as an auto driver for the past nine years. But due to age-related health problems, he has been unable to go to work. Four years back, he fell from a building and broke his leg after which he became disabled. Since his son is also unwell, Salim is the only bread-winner of the family which has been facing many financial constraints. They did not even have a house of their own.

Salim is undoubtedly one of the lucky few people who got immediate help. Upon hearing his problems, KCR called upon Hyderabad Collector Shwetha Mohanty and asked her to release a disability pension and two-bedroom house for Salim under the Chief Minister’s Relief Fund (CMRF).

Mohanty visited Salim’s house and assured that the required help will reach him soon. Salim’s medical assistance and his son’s financial assistance will be undertaken by Telangana government.

Now Salim and his family has all the reasons to cheer, Thanks to Telangana Chief Minister KCR.

Netizens were quick to respond as soon as KCR posted this on his official page Telangana CMO.

“This is an example of good governance..hats off KCR ..you are our pride”, commented Javeed Shaikh.