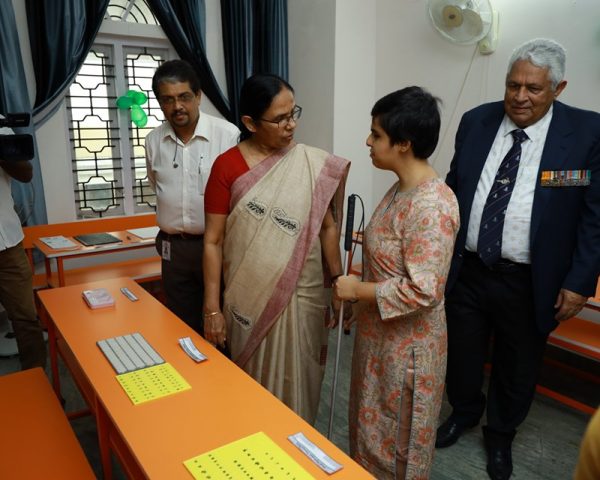 Tiffany Brar, the founder of Jyothirgamaya Foundation, has opened a preparatory school for visually impaired children in Kerala capital Thiruvananthapuram. With this Tiffany hopes to empower these toddlers to become a part of mainstream schools.

In a major step to empower visually impaired children at a crucial age, disability rights activist and founder of NGO Jyothirgamaya, Tiffany Brar has started a pre-school at Trivandrum, state capital of Kerala. This is the first such school in India.

Tiffany’s latest venture was opened in June by K K Shailaja, Kerala Health and Social Welfare Minister. Two children have enrolled so far and the school is fully supported by the state government.

We are seeking help from the Social Justice Department to identify eligible kids. We want to prepare young children for mainstream schools and the outside world. They must be able to do daily activities with ease. Introducing them to Braille, tactile and audio clips is going to be our priority, and to gear them for class one by the next academic year.- Tiffany Brar, Founder, Jyothirgamaya

Tiffany, who is a visually impaired person, underwent many struggles as a child and hopes this pre-school will address the challenges that many blind and low vision kids still face when it comes to accessing education. Most parents are forced to send their children to special schools due to lack of pre-schools for visually impaired kids. Tiffany’s new venture is going to be a blessing to many young students.

The school will start with six kids and they have been provided with Braille kits. There are two special educators on board as well.

Husna Ameen, a computer trainer, who is visually impaired welcomes this move and believes it will help empower many children.

“Even today, there are many parents of blind kids who are unaware of how they must help their kids when it comes to education. Hence, the idea of a preparatory blind school is great. I know a close friend of mine who has a three-year-old blind child, and she is struggling to empower her child”.

Husna also believes that a pre-school like this will help develop the children’s personality. “They must receive good guidance and learn how to become an integral part of the society. Hence it is important to catch them young”.

ALSO READ: Learn what you can & get ahead – My Take by Tiffany Brar, founder of mobile schools for the blind