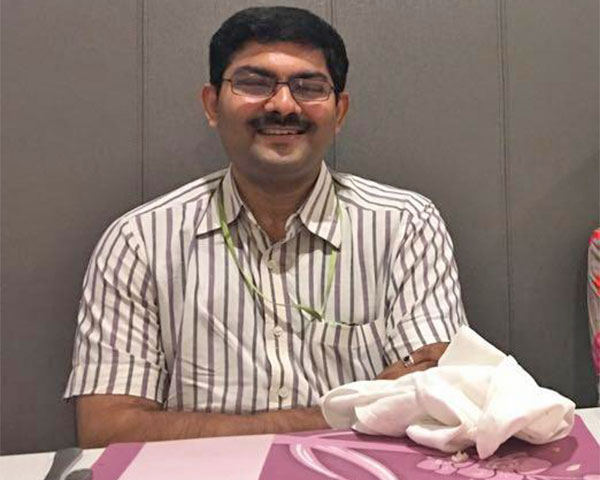 In My Take this week, we have 35 year old Vatsal Chandresh Shah, a visually impaired businessman from Baroda. Vatsal, who was a national champion in roller skating, lost his eye sight when he was around 14 years old. But he completed his studies and even pursued an MBA to come out in flying colours.

I was born and raised in Baroda, a city in the state of Gujarat. Just like every other kid, I was bright, naughty and a powerhouse of energy. I always aspired to become an engineer and go to the United States (US) and live there permanently. During those days, there were few very people who settled in the US.

I was very active in all the extra-curricular activities in my school including arts and sports. Table Tennis and Karate were my favourite. I gradually started developing an interest in Roller Skating and went on to become a national champion when I was in class 7 in the year 1995. I couldn’t stand facing defeats and was determined on getting nothing lesser than the first place in all the events that I participated. It wouldn’t have been possible without my mother’s support.

Life took an unexpected turn when I was in class 10. One day, during my vacation classes, I felt a deep pain in my stomach. Since my parents couldn’t turn up, I was taken to the doctor but my pain just did not subside. It started becoming unbearable that I had concussions. Soon, I went into coma. When I woke up after fifteen days, I realised that I had lost my eye sight, ability to hear, and also had short-term memory loss-Vastal Chandra Shah.

Though I gradually started hearing, I realised that my eye sight was lost completely. Since I was in school, my teachers and friends helped me complete my studies.

Soon, I visited the blind school and the staffs there suggested my parents to meet Yahya Saptawala, who is visually impaired and has achieved a lot. He used to teach me Braille and told my parents to not lose hope.

I had to complete my studies and since I had short-term memory loss it started becoming difficult. So my mother used to take down notes and repeat them to me till I learnt it. During 2001, Gujarat was hit by the worst earthquake due to which my exams were cancelled. So I got more time to prepare. I completed my arts and commerce in class 12. My Bachelor of Arts degree was completed from MSU in Baroda.

Though my dream was to become an engineer in the US, life changed a lot after a disability and so did my dreams. We have a family business which was run by my father. I and my brother took it over, and I’am super excited to bring that to bigger heights. As a kid, I used to accompany dad to factory and always was keen to know how it works. Now, I’am a full-fledged businessman and works along with my bother Neel Shah.

I had visited the US once and it did give me a lot of exposure. My brother, who has always supported me through thick and thin, wants me to go live in the United Kingdom for some time so that I can learn to become more independent.

I like travelling and have visited a few places on my own. “I want my family to understand that I can do things on my own so that they do not have to worry about me. I have been invited as a motivational speaker to many places. In fact, I’am a living example for everybody to know that nothing is impossible in life. Tough times don’t last but tough guys do”.

Also Read: ‘Work hard & you will achieve what you want’ – My Take by disability rights activist Maitreya Shah