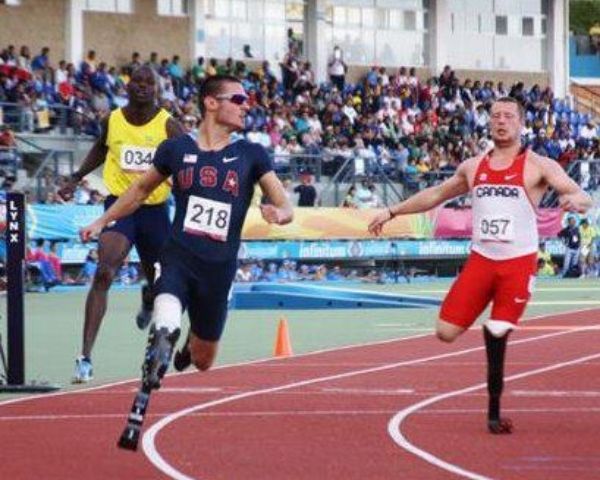 Parasports July 1, 2021
United States Paralympian and three-time world champion Jarryd Wallace is preparing to head for the Tokyo Paralympics. This is Wallace’s third Paralympic Games. Even as he prepares for the Games, he is giving back to disabled athletes. Find out how.

At the recent 2020 U.S. Paralympic Team Trials for cycling, swimming, and track and field, Wallace finished first in the 100-meter sprint, guaranteeing him a slot in his third Paralympic Games in Tokyo, Japan. Apart from his sporting accomplishments, Wallace has also won hearts for giving back to disabled athletes.

Wallace was 18 years old when he was diagnosed with a chronic case of Compartment Syndrome. This occurs when excessive pressure builds up inside an enclosed muscle space in the body slowing down the blood flow to and from the affected tissues. Wallace was told his lower right leg would have to be amputated.

This was a major setback. Wallace loved running and was talented at the sport. He was the state champion for his school and had gained admittance to the University of Georgia on an athletics scholarship.

Twelve weeks after his amputation in 2010, Wallace bought a running blade online and took up Para athletics. He looked at the world record lists for Para athletics and told his parents that he wanted his name to be on those lists.

I did it [the amputation] to be pain-free, but along with being pain-free I decided to set big goals and do things that hadn’t been done before. I came across the world-record list and said ‘I want to be on this list. I want to be the fastest amputee that’s ever lived’. – Jarryd Wallace, Two time Paralympian

Wallace broke onto the scene 12 months later at the 2011 Parapan American Games in Guadalajara, Mexico. He won the men’s 100m T44 in 11.31 seconds, a time that would have been good enough to win gold at the 2011 World Championships.

Wallace talks about his comeback after surgery:

Wallace is now on a mission to to empower disabled athletes in his country. He is part of Toyota USA’s initiative to support Team USA’s Paralympic athletes as they pursue their sport dreams. In partnership with the United States Olympic & Paralympic Committee, Toyota has made history with the creation of nearly US$5 million in stipend and sponsorship opportunities that will directly impact the lives of eligible U.S. Paralympic athletes aiming to compete at the Paralympic Games Tokyo 2020 or the Paralympic Winter Games Beijing 2022.

“I couldn’t be more grateful and proud to be a part of the Toyota USA family”, says Wallace. “Their $5M investment, which goes directly into the pockets of US Paralympic athletes, is the first of its kind. Never in US history has a company created a way for every athlete to receive direct financial support. This fund will be the difference of some athletes having a chance to compete and trials and missing out due to expenses. Lives are truly going to be changed because of this”.

In 2012, Wallace started the Leg in Faith Foundation that gives grants to amputees of age 18 and above who are committed to becoming future U.S. Paralympians. Back home in Georgia, Wallace spends a lot of time with other amputees. He helps them adjust to a new normal with a prosthetic. He also started the A Leg in Faith Foundation, which gives grants to amputees 18 years old and over who are dedicated to becoming future U.S. Paralympians.

“Really, your only limits are the ones that you put on yourself,” he says.