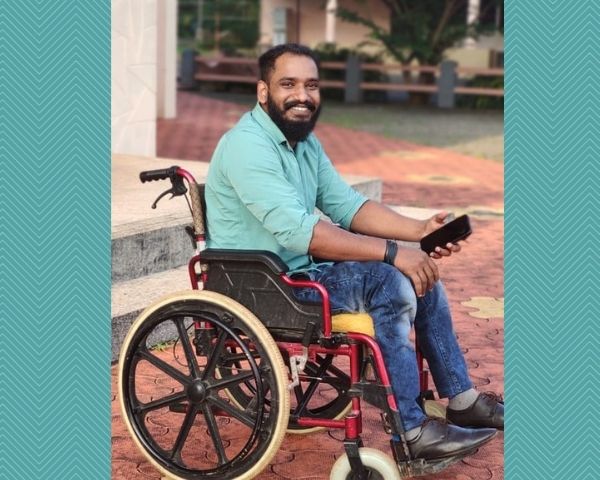 Udayan, 25 years old, hails from Malappuram, a small town in Kerala. A wheelchair user, Udayan met with an unexpected disability eight years back. He overcame that mainly with the help of family, friends and music. He is now a part of music troupe ‘Music on wheels’ and also rides an auto for a living.

Udayan, just like any other youngster of his age was an independent young man living life to the fullest when fate had other plans for him. He met with an accident leaving him with a lifelong spinal cord injury. Since past eight years Udayan, who is now 25 years old, has been a wheelchair user. It was not easy to come out of tough days soon after a disability. But Udayan’s story is all about determination and most importantly, how families can play a positive role in lives of disabled people. Udayan rides his own auto and is a singer who is part of the wheelchair music team ‘Music on Wheels’.

An unexpected disability in life

Udayan hails from Malappuram, a small town in Kerala. Just after completing his class 10, he was working part-time for a company nearby his home. On the fateful day, he fell from a building and broke his spinal cord. Everything that happened on the day is still fresh on Udayan’s mind. Soon after the fall, a few people took him to the hospital. His elder brother, who is like a father figure to Udayan, rushed to meet him at the hospital and told that he is going to be fine. He was later shifted to the ICU where he spent many days. “That is when I realized that I have a serious injury. I could feel my body in a different way”, recollects Udayan.

Days and months passed since Udayan started using a wheelchair. “Gradually, wheelchair became an inevitable part of my life”, he says. The toughest part was to get back to life by gathering all broken pieces. Udayan went under depression and started having suicidal thoughts. For someone of his age, it was hard to look at life in a positive manner given the hardships he was undergoing.

But his family and friends stood by him. “I’am forever indebted to them for that. If not for their support, I couldn’t have bounced back to life”, he says.

Looking at the positive side

Udayan happened to attend the ‘Santhwanam’ camp where he met many people with disabilities. “Some of them were unable to walk, do things on their own or even sit up straight. That is when I started counting my blessings. All that made me feel better. Gradually, being a part of the camp started imbibing positivity inside me”, says Udayan who smiled again in life. According to him, the biggest gift that he could give to his family was that smile on his face after all that they went through!

Since he was inside his room most of the time, Udayan started listening to songs and realized that he had hidden talents to sing. He started singing at various events for which he received a lot of appreciation. Music gave him a new lease of him, something to look forward to. A few years back, he became a part of the music troupe ‘Music on Wheels’ started by a group of wheelchair users. “Music gives me immense happiness”, says Udayan.

He attempted to complete his schooling by finishing class 12 two years back. But due to an unexpected injury, he couldn’t. Currently, he rides an auto more like an ‘auto on call’. He has customized the vehicle according to his physical requirements. But Udayan is looking into doing something more productive so that he can support himself and his family.

“I want to take care of my mother because she is the one who does everything for me. I realized that nothing can be planned in life. God has decided a fate for us. Be happy when you are here and enjoy life to the fullest”, signs off Udayan.