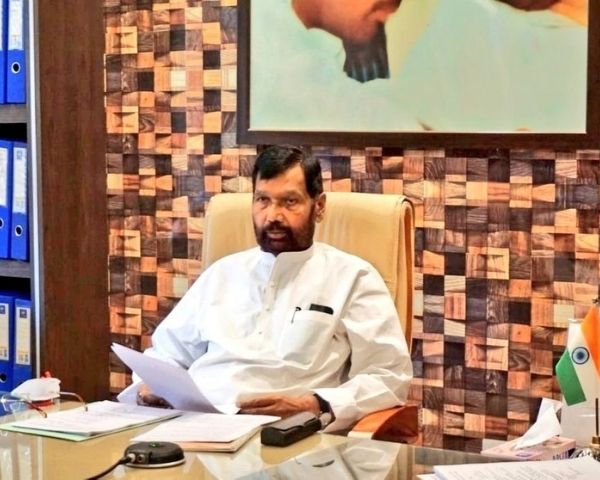 Union minister Ram Vilas Paswan, who handled Consumer Affairs, Food and Public Distribution passed away on Thursday evening after a heart surgery. Paswan, who hails from Bihar, is also the founder of Lok Janshakti Party and staunch Narendra Modi supporter. The 74-year-old was admitted at a Delhi hospital and had to undergo a heart surgery last Saturday. Reportedly, his condition was not stable after that.

Tweeting about the death of his father, political leader Chirag Paswan posted a heartwarming message “Papa, now you are not in this world but I know wherever you are, you are with me. Miss you papa”.

Paswan’s mortal remains will be brought to his Delhi residence and then taken to Patna. He will be given a state funeral and the cremation will take place at Patna on Friday itself. The entire country is going to pay respects to the late leader by flying the national flag half-mast at Delhi and other state capitals.

With Bihar elections round the corner, Paswan’s death is likely to add an emotive element to the campaign.

“I am saddened beyond words. There is a void in our nation that will perhaps never be filled. Shri Ram Vilas Paswan Ji’s demise is a personal loss. I have lost a friend, valued colleague and someone who was extremely passionate to ensure every poor person leads a life of dignity”, tweeted Prime Minister Narendra Modi.

“In the demise of Union Minister Ram Vilas Paswan, the nation has lost a visionary leader. He was among the most active and longest-serving members of parliament. He was the voice of the oppressed, and championed the cause of the marginalized”, tweeted President Ram Nath Kovind.

“Deeply saddened to hear the news of the passing away of Ram Vilas Paswan Ji. He was a veteran politician, leader and a long-time Parliamentarian. My condolences to his family, colleagues and his many admirers”, tweeted West Bengal Chief Minister Mamata Banerjee.

“Deeply saddened to learn of the passing away of Shri. Ram Vilas Paswan. Our heartfelt sympathies go out to his family & friends. On behalf of the people of Kerala, I offer our deepest condolences”, tweeted Kerala Chief Minister Pinarayi Vijayan.