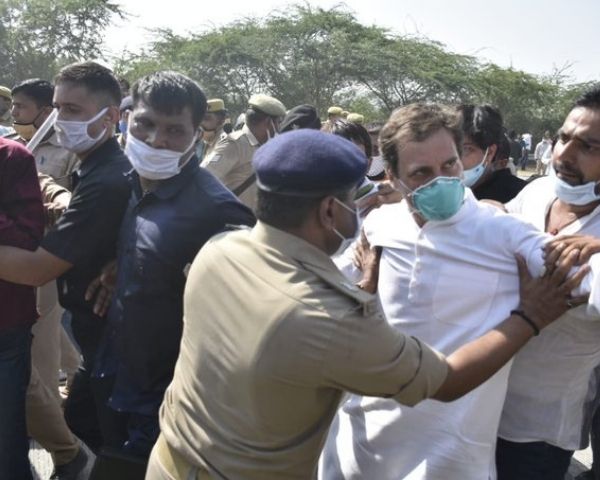 In dramatic scenes that unfolded at the Yamuna express highway on Thursday afternoon, Congress leaders Rahul Gandhi and Priyanka Gandhi Vadra were detained by Uttar Pradesh (UP) cops for trying to enter Hathras. A police case was also filed against both of them under the epidemic act. The sibling duo were reportedly on their way to meet family of the Hathras gang-rape victim who died on Tuesday.

Convoy of the Gandhi’s were stopped mid-way by UP cops after which the Gandhi’s started walking by foot when they were stopped again. In videos that circulated on social media and news platforms, cops could be seen pushing Rahul who fell down on the road.

When Rahul asked why he was being arrested, cops said that he was charged under section 188. The video also shows heated arguments between cops and Rahul after which the Gandhi’s were moved to another spot. Congress supporters were lathi charged by cops.

There was widespread criticism over UP administration pulling up sign boards stating that large gatherings have been banned due to Covid spread in the wake of Gandhi’s visiting the place.

The Hathras victim, a 20-year-old girl was gang-raped allegedly by five men earlier this month while she was working on a field. Her tongue was slashed and the victim had suffered grave injuries when she was admitted into a Delhi hospital for treatment. But she succumbed to her injuries on Tuesday. The UP police, even before doing a post-mortem, opted for a quick funeral of the victim and her family was not allowed at the funeral. There was nationwide outrage over the incident. Section 144 has been imposed in Hathras district.

Opposition parties criticized chief minsiter Yogi Adityanath and UP police who had failed terribly to control crime against women as a rising number of rape cases are being reported from the state.