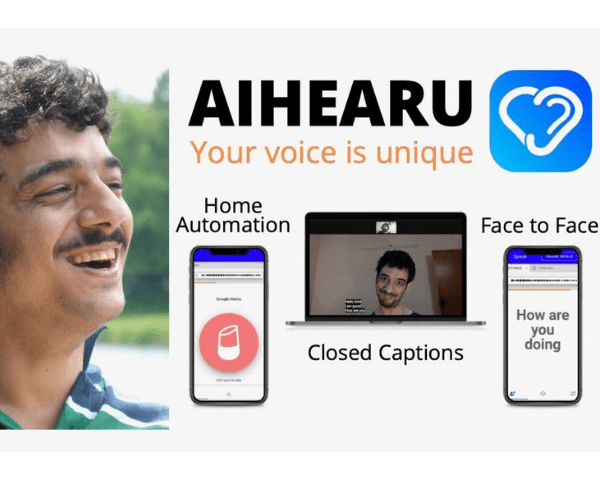 Pronounced as “I hear you”, AIHEARU is a Canadian company that provides AI-based speech training and learning platform for speakers. The platform develops speech to text engine for users that can be used for communication and decoding speech. The AI-based learning engine customizes the offering from user to user.

Speech-to-text technology has really advanced over the last 20 years, and for many people it’s now the go-to method of interacting with their devices. But even as the technology’s improved, it’s really only effective for people whose voice and speech patterns are similar to those of the general population. Currently, speech-to-text uses crowdsourced data to train its artificial intelligence (AI) algorithms to recognize what is being said.

People with cerebral palsy, stroke victims, and others with speech problems can’t use speech-to-text since the crowdsourced speech doesn’t sound like their speech. The accuracy of speech-to-text for those with speaking problems can be less than 10%. If speech-to-text is to become truly universal, it has to be able to support all speakers, including those who have difficulty speaking.

AIHEARU (pronounced “I hear you”) is a speech-to-text system that learns each user’s unique speech patterns over time. The AI in AIHEARU uses a foundational data set for a user’s initial interaction; however, the more a user interacts with AIHEARU, the more it becomes tailored to their unique way of speaking.

Given time to learn, AIHEARU boasts an accuracy rating of over 90% for individuals who have difficulty speaking clearly. Along with the AI model, AIHEARU will offer an open API that allows integration with popular communication platforms such as Zoom, or voice assisted services like Siri, Alexa, and Google Assistant. Integrating AIHEARU with existing voice-based communication systems could expand the market for many services currently inaccessible to those that have difficulty speaking.

For Amit and Arun, working on AIHEARU has been a mission project. Both of them are passionate about putting their skills and advancements in technology to good use. They have embarked on this challenging project and have seen the possibility of it actually making a difference in the lives of many.  The current trend for UI is going from touch screen based to voice activation based.

Speech and voice assistant market is projected to grow to $30B+ by 2025. While this helps many, it leaves behind a large set of users with speech difficulty, creating a new gap for accessible technology. There is a large population who have some sort of speech impediment either by birth or due to some condition.

“There is a famous quote: ‘The future is here, it’s just not very evenly distributed’. We believe in using technology for the good. With AIHEARU, we are connecting many of our users to enable them to make use of the advancements in technology, and be more independent. This is our contribution in making the future more equitable. ” Arun Munje, CEO.

Check out this Demo Video

There is a huge opportunity waiting to extend this technology to help others with thick accents, other languages, mixed languages etc. However the approach is to make sure the main target, that has been under served for a long time, is addressed first, and only then consider any expansion.

AIHEARU is currently conducting private trials with individuals and NGOs like “Yes We Can” from India. To know more about them visit the AIHEARU website.