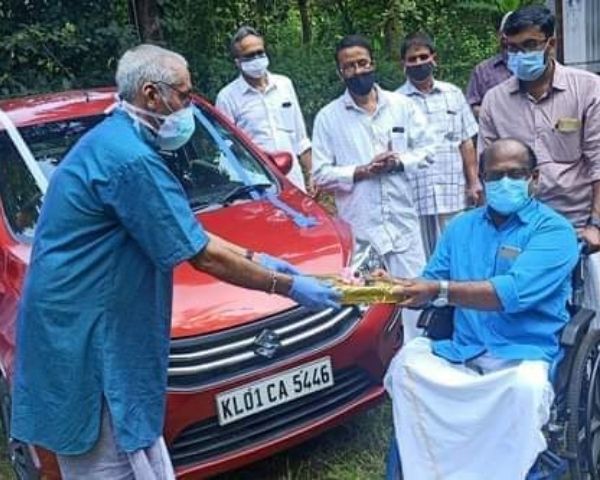 Vasunni Pattazhi, a wheelchair user from Kerala was recently gifted a brand new car by his old classmates, a gift for him to cherish a lifetime. Vasunni, who is also an active social worker, talks about his journey.

57-year-old Vasunni Pattazhi is a wheelchair user who hails from Pattambi in Kerala. An active social worker, Vasunni was struggling to travel to places since his customized car was not in a good condition. Last week, a special gift arrived for him from ex-classmates at school. Vasunni is now the proud owner of Maruti Celerio in which he can move around comfortably. While talking about his latest gift, Vasunni doesn’t hide his excitement.

An accident and life thereafter

It was in the year 1983. Vasunni, who was gearing up to join the Indian army, was visiting his brother and father at Bengaluru. One day, as usual, he took out his cycle for a ride when a truck came and hit him. The truck did not stop and they sped off without turning back. Vasunni, with the help of a few kind souls, was admitted to a hospital and was soon diagnosed with a spinal cord injury. He realized that his life had changed.

“During that time, there were no awareness about disabilities. I did not even know what a spinal cord injury meant. Now, it has been 36 years since I’am on a wheelchair”, says Vasunni who currently resides with his brothers.

In the year 2003, Vasunni happened to see a customized car used by a person with disability. He made a technician design something similar for him so that he could drive using his hand. “Wheelchair was not a feasible option to be used everywhere. During those days, wheelchairs were huge, something often used by people at hospitals. So to move around, car was a better idea” remembers Vasunni.

In the year 2004, Vasunni started his own automobile spare parts shop which did decently well. During the same time, he became active in social work too. “I had a lot of free time on Sundays. I started meeting people with disabilities like me. I became part of NGO’s and disability organizations”, he says.

For someone who was staying inside the home for over 20 years, breathing fresh air gave a new lease of life. “During those days, my only activities were reading and spending time with friends. Stepping out was a great feeling”, he says.

Vasunni is also the state working president of the organization All Kerala Wheelchair Rights Federation (AKWRF).

He is also an integral part of NGO’s ‘Suraksha’ and ‘Sahayatrika’.

A new gift from old friends

It was almost two years back that Vasunni happened to meet his old friends from his class 10. Being the first batch of their school, coming across each other after decades was indeed a special feeling. “Many had passed away and many others were settling down in life. Thanks to technology, we could all connect”, he says.

They planned for a re-union in April 2020, but it got cancelled due to the Covid pandemic. “In our WhatsApp groups, my friends were talking about fund collection and asked me to keep the funds. Once a huge amount was collected, they told me that they were going to gift a car for me with the money. I hesitated at first, but then they convinced me. Most importantly, I needed a car”, says Vasunni who has given the car for customization.

Needless to say, Vasunni is thrilled with the new gift and is obliged to his friends for making his life better so that he can become more independent now.